Australia snapped up two wickets in the final session Friday to leave India with work to do in the third Test as they chase the hosts' 338 following Steve Smith's first century in more than a year. 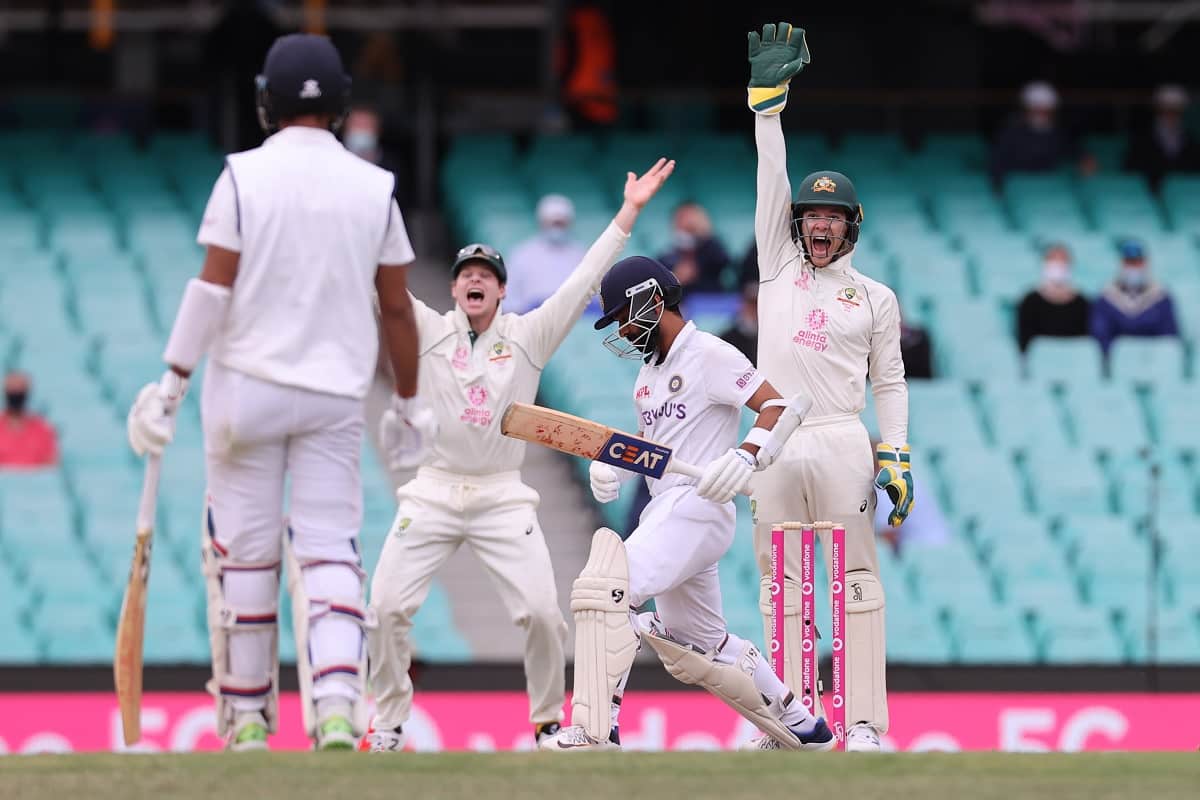 The dogged Cheteshwar Pujara was not out nine and captain Ajinkya Rahane, who scored a century in the last Test at Melbourne, on five.

Australia resumed their first innings at the Sydney Cricket Ground on 166 for two, but only managed another 172 in the face of India's spirited fightback led by spinner Ravindra Jadeja who took 4-62.

Smith, though, was the star attraction, smacking 131 -- his 27th century, and his first since the 2019 Ashes in England -- before being the last man to fall. Marnus Labuschagne made 91 and Will Pucovski 62 on debut.

India's openers negotiated a tricky nine overs before tea to be 26 without loss, and they put on another 44 before Hazlewood struck, removing Sharma for 26.

The veteran right-hander hadn't played since straining a hamstring in October and only joined the team last week after spending a fortnight in quarantine.

But he quickly shook off the rust, hitting a big six off Nathan Lyon before surviving a scare on 24, when he was given out before the decision was reversed on review.

His reprieve proved short-lived, however, making just two more before being caught and bowled.

At the other end Gill, who made his debut in Melbourne, scoring 45 and 35 not out, again showed his composure and skill, reinforcing his status as a potential long-term opener.

Just 21, he brought up a maiden Test half-century before nicking an edge to Cameron Green off Cummins.

It left Pujara and Rahane to dig in and see India safely to stumps as the runs dried up.

Smith, who averages more than 61, failed to reach double figures in the first two Tests but roared back to life on his home ground, reaching his ton off 201 balls.

He looked comfortable throughout, crunching a four off Jasprit Bumrah on the first ball he faced from India's top bowler Friday to signal his intent.

He survived an ambitious lbw review on 41 before bringing up a patient century then letting rip, adding a quickfire 31 before being run out by Jadeja's fabulous direct hit.

Smith had resumed on 31 and Labuschagne 67, with both men making the most of a relatively flat pitch to bring up a 100-partnership.

It was a typically gritty innings from Labuschagne on a ground where he scored 215 this time last year against New Zealand.

But as he closed in on a fifth Test century, he was bamboozled by a Jadeja ball that took extra bounce, thick-edging it to Rahane at slip.

Smith brought up a 30th Test half-century before light rain set in.

On their return from 24 minutes off the field, following an earlier eight-minute break, Matthew Wade was undone by his natural aggression, recklessly skying a Jadeja ball to Bumrah.

Green went without scoring, trapped lbw by Bumrah who then clattered the stumps of Tim Paine (1).

Cummins was then bowled by Jadeja for nought as Smith began running out of partners.

He found an ally briefly in Mitchell Starc to ensure he made his century, before the tailenders were mopped up.