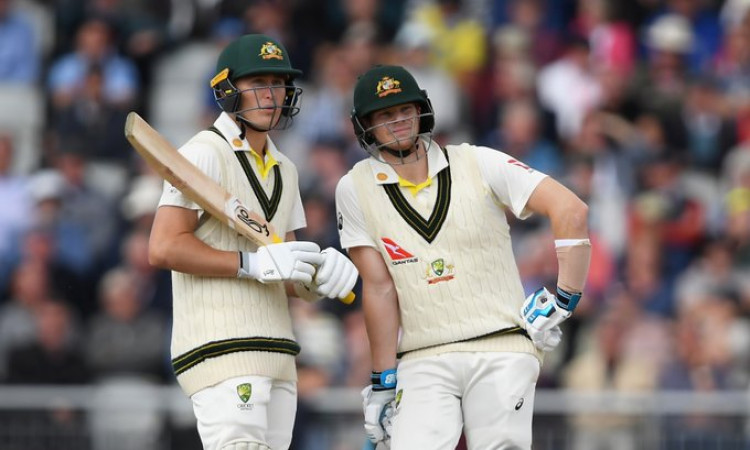 Manchester, Sep 4: Marnus Labuschagne remained one short of his fourth straight half century as he and Steve Smith (28) guided Australia to 98/2 at lunch on Day 1 of the fourth Test on Wednesday.

Skipper Tim Paine won the toss and chose to bat first on a chilly morning at Old Trafford with the pitch bereft of much grass. While the tourists welcomed back Smith into the fold after he was out of the third Test with a concussion injury suffered in the second rubber, England made one change to their Playing XI, including right-arm fast bowler Craig Overton for all-rounder Chris Woakes.

The Aussies lost David Warner in the first over, the experienced southpaw dismissed by Stuart Broad for the fifth time in this series. Warner was trying to leave a ball outside the off stump, but his late decision got the red cherry to take the outside edge of the bat and fly to Jonny Bairstow.

Fellow opener Marcus Harris (13) did not last long too, Broad trapping him in front during a spell of superb fast bowling where he got his seam position perfectly right.

In came Smith to a not so rousing reception. But the best was saved for Jofra Archer when he came to bowl to the former Australia captain for the first time since knocking him over with a ferocious bouncer that led to the world's best Test batsman's delayed concussion.

Smith crunched Archer for a four through the covers to win the early duel but at the other end, Labuschagne -- who was Smith's replacement initially -- continued his good work by hitting eight delectable fours to race to 49 off 82 balls. Smith was batting on 28 from 48 deliveries.