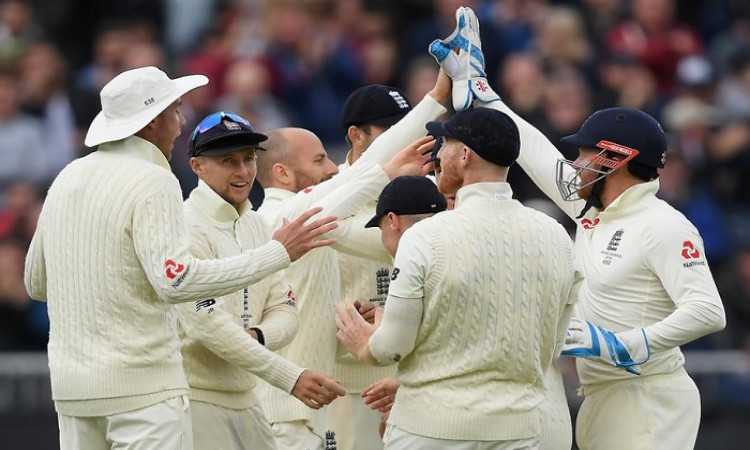 London, Sep 15: Stuart Broad took out the openers and Jack Leach got Marnus Labuschagne as England continued their march towards a series levelling win at The Oval on Day 4 of the final Ashes Test on Sunday. Steve Smith is still in the middle, thus keeping alive Australia's slim chances but he was hardly allowed to settle by Sam Curran. Australia are 68/3 chasing a target of 399.

Australia took just over four overs to wipe out whatever remained of the England's tail from the previous day. Pat Cummins dismissed Jofra Archer, while Nathan Lyon got Jack Leach and Stuart Broad, finishing with four wickets in the innings.

Broad started the England attack, with David Warner and Marcus Harris opening for Australia. Warner, who has been dismissed six times in the last nine innings by Broad, struggled for the majority of his stay against his tormentor and Archer.

But it was his partner who was dismissed by Broad first, off the last ball of the fifth over with Harris losing his off stump that went cartwheeling after the ball missed his outside edge and struck the stumps unimpeded. Warner fell in the very next over of Broad, edging one to slip where Rory Burns took a good catch making it the seventh time in the series that Warner has fallen to Broad.

Jack Leach then got the big wicket of Marnus Labuschagne. Leach lured Labuschagne forward but the delivery beat his edge and went to Jonny Bairstow who broke the stumps and England appealed. Replays showed that Labuschagne's backfoot had dragged outside the crease and he had to walk off.

Smith is in the middle with Matthew Wade, who nearly edged one off Leach to the keeper in the last over of the session.