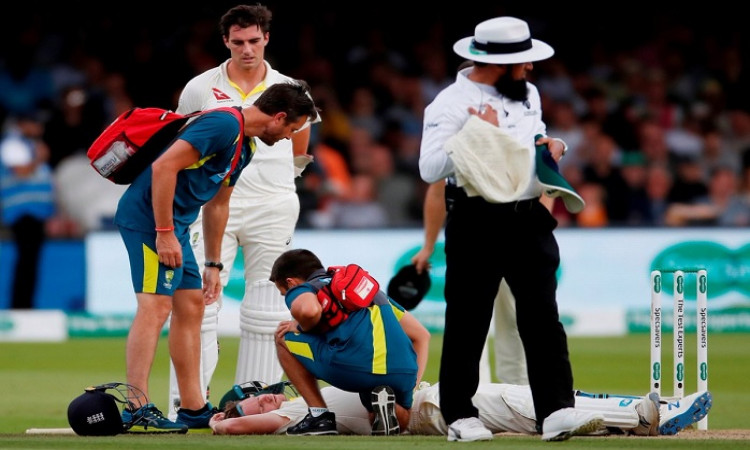 Leeds, Aug 28: Former Australia skipper Steve Smith has revealed that the first thought which came to his mind after he was hit on the neck by a ferocious bouncer from Jofra Archer was the death of his teammate Phillip Hughes.

"I had a few things running through my head, particularly where I got hit, just a bit of past came up -- if you know what I mean -- from a few years ago," news.com.au quoted Smith as saying as he referred to the day Hughes was struck and died in a Sheffield Shield match between New South Wales and South Australia in 2014.

"That was probably the first thing I thought about, then I was like 'I'm OK here' and I was all right," he added.

On Day Four of the Lord's Test, Smith retired hurt on 80 after being hit on the neck by a 92.4 mph delivery from Archer. He returned to make 92, but was ruled out the next day due to delayed concussion which kept him out of the third Test at Headingley.

"I was a little bit sad but I was all right mentally for the rest of that afternoon," he said.

"I felt pretty good, passed all my tests and was able to go and bat and then it wasn't until later that evening that it hit me.

"When the doc asked me what did it feel like I said it felt like I had six beers last night and felt a little bit under the weather -- without the six beers unfortunately. That was the sort of feeling I got, that groggy feeling and that stuck around for a couple of days," he added.

Smith has however insisted that despite the incident, he is unlikely to wear a StemGuard during the fourth Test at Old Trafford as they make him feel claustrophobic.

"I've tried them before and I tried them the other day when I was batting (in the nets) and I reckon my heart rate went up about 30 or 40 straight away," Smith said.

"I just feel claustrophobic. I compare it to being stuck in an MRI scan machine.

"They're probably going to become mandatory, so I'm going to have to get used to them. I'm sure the more I wear them, the more I practice with them, my heart rate will come down and everything will be ok," he added.