June 12 (CRICKETNMORE) Australia opener David Warner scored his first hundred since the Sandpaper Gate fiasco, but Pakistan pacer Mohammed Amir stole the show with a career-best five-wicket haul as Pakistan dismissed Australia for 307 in 49 overs in their World Cup clash on Wednesday. 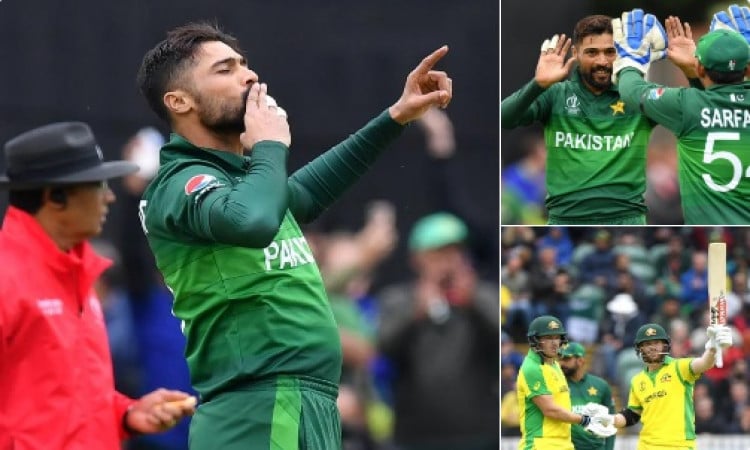 Warner, whose last two fifties off 74 and 77 deliveries -- are the slowest of his one-day international career -- had a point to prove and the dashing southpaw took 111 balls to get to his 107, studded with 11 fours and one six.

Skipper Aaron Finch supported him well with a belligerent 82 off 84 balls (6x4, 4x6) as the pair added 146 runs for the opening wicket. But Amir (5/30) dented Australia's run-flow with crucial wickets as young Shaheen Shah Afridi (2/70) also did well with the ball.

Pakistan made amends for their initial failure as the bowlers failed to make the most of overcast conditions and the seam movement that was available off the pitch after skipper Sarfaraz Ahmed put the Aussies in.

Pakistan were poor in the field, dropping a few catches including one each of Finch when he was batting on 25 and Warner when he was on 104. On both occasions, Asif Ali was the culprit and the bowler was Wahab Riaz.

The defending champions, who had lost to India in their previous encounter, were off to a dream start with Warner and Finch going great guns. Finch brought up his 22nd ODI fifty in 63 balls by hitting Mohammed Hafeez for consecutive boundaries and then smashed a six as he was particularly severe on the 38-year old off-spinner.

Amir broke the partnership and it was Finch who paid the price for his needless urgency, holing out to Hafeez at mid-wicket in the 23rd over. Former skipper Steve Smith failed on the day, his leading edge caught by Asif at mid-wicket off Hafeez.

From there on, the Aussies could not get partnerships going as Pakistan reined in largely due to Amir's incisive spell. Warner was lucky to get to his hundred, a thick outside edge racing to the third-man fence as he celebrated in his trademark style.

He finally walked back to the hut for 107 after being caught by Imam-ul-Haq off Shaheen Afridi's bowling. Since Warner's dismissal, Australia managed just 64 runs for the loss of six wickets, losing five wickets for just 21 runs in between overs 45 and 49.