June 22 (CRICKETNMORE) Afghanistan tweakers spun a web around Indian batsmen to restrict them to 224/8 in 50 overs despite half centuries from skipper Virat Kohli and Kedar Jadhav in a World Cup clash here on Saturday. 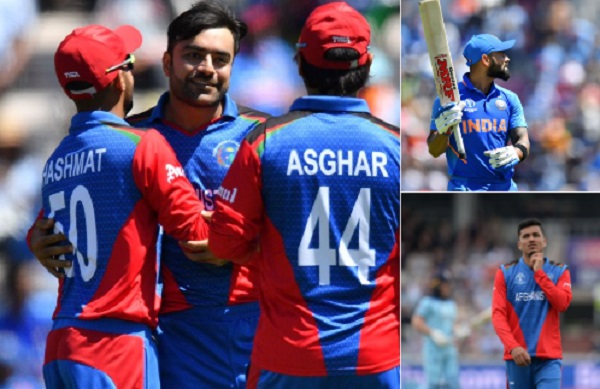 This is India's lowest first innings total batting all 50 overs since 2010.

Kohli struck his third consecutive fifty with a classy 67 off 63 balls, his innings laced with five fours, while Jadhav scored 52 off 68 deliveries (3x4, 1x6) before being taken at cover by substitute Noor Ali Zadran off Gulbadin Naib.

But a spirited Afghanistan, who kept behind their huge loss to England in the last game, rode Mohammed Nabi's 2/33 and wickets each for Mujeeb Ur Rahman (1/26), Rashid Khan (1/38) and Rahmat Shah (1/22) to keep the run-flow in check throughout the innings.

Skipper Naib took two wickets in the last over, removing Jadhav and Mohammed Shami (1) to cap off a brilliant bowling display by the team which still finds itself at the foot of the points table, without a win, and battling off-field issues and infighting.

M.S. Dhoni laboured to 28 off 52 balls (3x4) bringing back to memory the days when he was questioned for his slow pace in the twilight of his career.

There was an injury scare to star player Rashid who hurt his left leg while fielding at long on in the 50th over off Naib. Rashid tried to stop a boundary but picked up an injury, and was later seen hobbling off the pitch.

India lost their openers early after electing to bat first on a slow deck where spinners got assistance and the ball was not coming on to the bat.

Rohit Sharma, who was the hero in India's last game against Pakistan, was castled by Mujeeb for 1 off 10 balls with a ball that left the right-hander to disturb the furniture.

Jolted by the early setback, India took time to get going with K.L. Rahul smacking a backfoot punch through covers for the first boundary in the sixth over.

In the same over, Aftab found Rahul's outside edge but agonisingly for Afghanistan, the ball flew in between wicketkeeper and first slip for a four.

Rahul looked solid for his 30 off 53 balls (2x4) but lack of patience, which has been his bane for a long time, cost him dear as he needlessly tried to reverse sweep Nabi only to miscue his shot with the ball going to Hazratullah Zazai at short third man where he took an easy catch.

Kohli and Vijay Shankar then shared a 58-run stand for the third wicket before both got out in quick succession.

Kohli welcomed Afghanistan's trump card, Rashid Khan, who broke an ugly record against England by becoming the most expensive bowler in World Cup history, with a delectable four as he brought up his 50 off 48 balls, his third consecutive half century and 52nd overall in ODI cricket.

But at the other end, Shankar departed for 29 off 41 balls (2x4) trapped in front by Rahmat Shah after showing early promise as a no. 4 batsman.

India took a review but replays showed there was bat first and the ball was hitting in line.

In came Dhoni but Kohli's search for a first hundred this World Cup continued, as he cut Nabi straight to Rahmat Shah to dived forward to complete the catch.

Dhoni struggled to get going against the spinners and laboured to a slow 28 before Rashid drew him out of his crease as he tried to up the ante, with wicketkeeper Ikram Alikhil stumping the former India captain.

In the last five overs, India could only manage 30, losing three wickets as the likes of Hardik Pandya (7) also failed.