Virat Kohli urges team not to be content with home success

Bengaluru, Sep 29 (Cricketnmore):  India cricket team captain Virat Kohli reckons that they need to transform their good form at home when they travel abroad in order to be more successful. 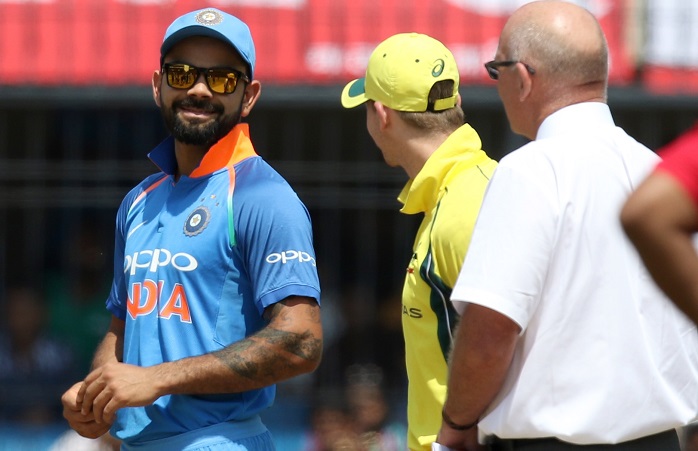 Asked to react on former captain and batting legend Sunil Gavaskar's recent comment that the current team could end up being the greatest ODI side India has ever produced, Kohli said on Thursday: "It is a decent compliment. To be appreciated for our skills, obviously coming from an Indian cricket legend (Gavaskar), it feels good because he has seen a lot of Indian teams over the past few years.

"(But) the journey is very far and the team is young. We are playing at home right now. If we can replicate this form in conditions that are alien to us after that we can be happy.

"But for now, we are trying to be more consistent," Kohli noted after conceding the first loss in the five-match One-Day International (ODI) series against Australia.

"It gives us more motivation and belief to keep doing the things which we are doing right now."

India have overwhelmed each and every opposition in the home competitions in the past 18 months but the same can't be said about their away performances.

Kohli was commenting after India lost the fourth ODI by 21 runs. Kolhi was on the verge of creating an Indian record for the most consecutive wins (nine) but India failed to chase down the 335-run target set by the visitors.

"When Hardik and Kedar were batting we thought this was the ideal situation for them to understand how the game can be taken till the end. They really did a good job with that partnership," the skipper said.

"There are a few positives from the game but this pitch was such that one team had to bat better than the other," Kohli added.

Kohli also defended pacers Umesh Yadav and Mohammed Shami, who went for many runs. The pair was given the chance in place of rested Bhuvneshawar Kumar and Jasprit Bumrah.

"We have won the series and you have to try out guys at some stage. You need to test your bench strength as well and you need to give those guys game time," he said.

"Your bowlers will not have perfect days every time. You try, you go for something, if it doesn't work make another plan and you go for it again. That is exactly what I think and what the whole squad thinks".