Colombo, March 16 - Riding on some brilliant batting from middle-order batsman Mahmudullah (43 not out), Bangladesh edged past Sri Lanka by two wickets to enter the final of the Nidahas Trophy T20 tri-series here on Friday.

At one point, the hosts were tottering at 41/5 inside 10 overs and then somehow, scored a decent score of 159 which Bangladesh chased down with a ball to spare.

In a topsy-turvy match,A the real drama unfolded in the last over when Bangladesh needed six runs in two balls and Mahamuduullah finished off the things in style. The batsman flicked away over backward square leg for a six off pacer Isuru Udana to seal the deal.

Bangladesh will now face India in the final on Sunday.

Chasing 160, Bangladesh started off on a bad note as they lost opener Liton Das (0) and Sabbir Rahman (13) in first three over of the innings.

Unperturbed by the fall of wickets, opener Tamim Iqbal (50), along with new batsman Mushfiqur Rahim (28), kept on playing his shots which mounted some pressure on the Sri Lankan bowlers.A

At one point, Bangladesh were cruising at 97/3 in 13 overs but the sudden fall of wickets at the other end worried in-form Iqbal and as a result the opener was dismissed after scoring a half century.

Skipper Shakib Al Hasan (7), who was earlier out of the action in the series due to injury, also failed to contribute.

But towards the end, Mahamudullah rose to the occasion and held his nerve till the end to make sure his team enter the final.

Apart from them, no other batsmen stepped up for the cause and went back to the pavilion one after another. 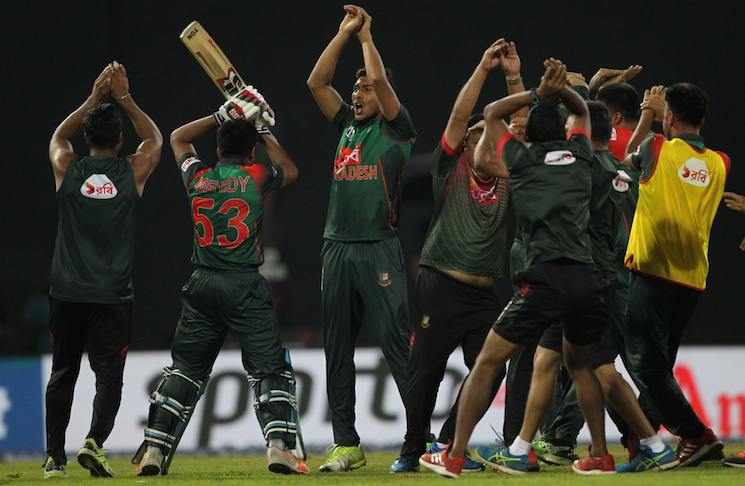