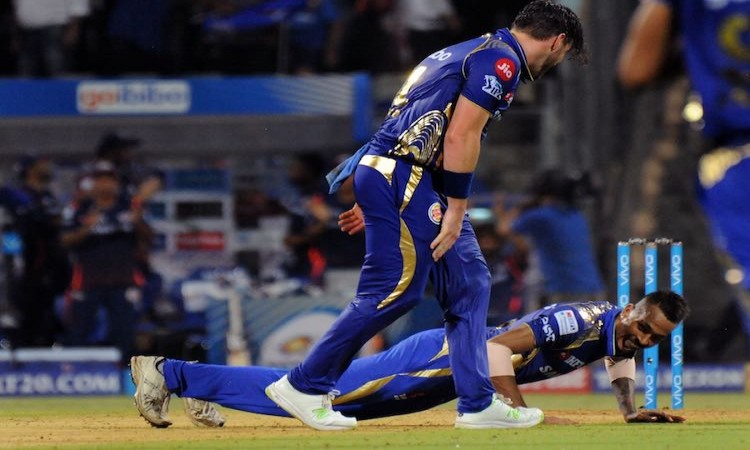 After a brilliant batting display, Mumbai bowlers managed to restrict Punjab to 183/5 to bag two crucial points. With this victory, Mumbai are now sitting at fourth spot with 12 points while Punjab slipped to sixth spot.

Chasing 187, openers Lokesh Rahul (94) and Chris Gayle (18) provided a steady start, scoring 34 runs in four overs. But Gayle was departed in the same over by pacer Mitchell McClenaghan.

Aaron Finch (46) and Rahul then forged a crucial 111-run partnership. The duo slammed Punjab bowlers all around the park and also played some beautifully crafted shots.

But just when things seemed good in the middle, Finch was dismissed by pacer Jasprit Bumrah in the 17th over. His 35-ball knock was laced with three boundaries and one six.

New batsman Marcus Stoinis (1) also failed and got dismissed in the same over.

While trying to match the increasing run rate, in-form Rahul was also dismissed by Bumrah in the 19th over. His 60-ball innings was laced with 10 boundaries and three sixes.

Middle-order batsmen Axar Patel (10 not out), Yuvraj Singh (1) and Manoj Tiwary (4 not out) tried to reach the target but failed.

Put in to bat, Mumbai were off to a flying start with the in-form Suryakumar Yadav (27 from 15 balls; 4x3, 6x2) and Evin Lewis (9) putting on 37 runs in the first three overs before Australian Andrew Tye's triple strikes reduced the hosts to 59/3 in no time.