Mumbai, May 21 (CRICKETNMORE) - As the 11th season of the Indian Premier League (IPL) nears its climax, all eyes will be on the top two sides -- Sunrisers Hyderabad (SRH) and Chennai Super Kings (CSK) -- locking horns in the first qualifier on Tuesday at the Wankhede Stadium here for a place in the May 27 final. 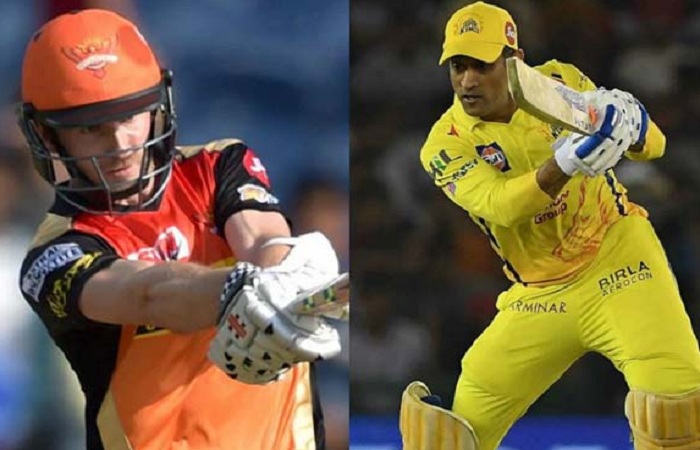 Both Chennai and Hyderabad finished the league stage on 18 points, but the Kane Williamson-led side got their neck ahead to the No.1 spot with a superior net run-rate and Tuesday's winner will be guaranteed a place in the final at the same venue while the loser gets a second chance in the second qualifier in Kolkata on May 25.

Going in to the match, the Mahendra Singh Dhoni-led CSK hold a slight edge as they have got the better of their southern rivals twice in the league stage this season.The yellow brigade have been on a roll since making their comeback to the IPL fold after serving a two-year-ban, and have rarely lost the momentum this season with the old guards and new sensations firing in unison.In their final league game at their adopted home ground in Pune on Sunday, CSK rode on Suresh Raina's gutsy half century to not only romp home by five wickets but also stop Kings XI Punjab from entering the play-offs.

On the other hand, the Sunrisers have been on a three-game losing run, having already sealed their play-off spot with a victory on May 10 against Delhi Daredevils. Interestingly, it was the CSK who halted Sunrisers' six-game winning streak with a comprehensive eight-wicket drubbing on May 13 in Pune. Much of the credit for the Orange Army's entry into the playoffs goes to the consistency of skipper Kane Williamson, who sits second in the leading run-getters' list with 661 runs and the bowling unit leg by paceman Bhuvneshwar Kumar and Afghan spinner Rashid Khan.

Besides Williamson, Shikhar Dhawan (437 runs) has lately come good with the bat but it is the middle order comprising Manish Pandey, Wriddhiman Saha, Yusuf Pathan and Shakib Al Hasan, who needs to share the responsibility of building on the platform set up by the top order. Sunrisers' bowling this season have been extraordinary with Rashid and Shakib as well as the pace trio of Bhuvneshwar, Siddarth Kaul and Sandeep Sharma, combining well to defend paltry totals.

On Tuesday, Sunrisers will once again hope that their bowling will do the trick against an in-form Chennai top order comprising the likes of Ambati Rayudu, who has been their standout performer with 586 runs and had in fact taken the game away with a scintillating hundred when the two teams last met. Rayudu's opening partner Shane Watson has also been in top form, accumulating 438 runs from 13 matches, while Suresh Raina, skipper Dhoni and all-rounder Deepak Chahar have been the backbone of CSK's middle order.

In the bowling front, the former two-time champions will bank on young South African Lungi Ngidi, who grabbed 4 for 10 to take the man of the match award on Sunday. With Shardul Thakur, Chahar and Dwayne Bravo doing their bit on the pace bowling front, CSK will hope for veteran Harbhajan Singh leading the spin attack with left-armer Ravindra Jadeja in the middle overs. The match timings for the play-offs have been advanced by one hour, which means the match will start at 7 p.m. Ahead of the clash, a women's exhibition game will take place at 2 p.m. with top Indian and foreign players taking part in the contest at the Wankhede.