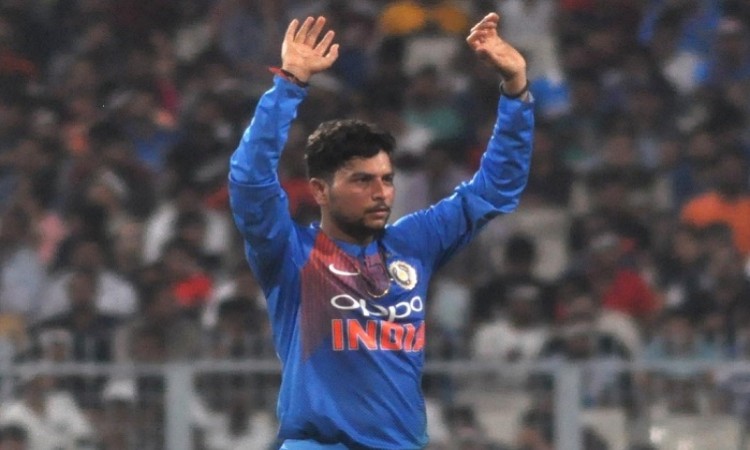 Kolkata, Nov 4 (CRICKETNMORE): Chinaman bowler Kuldeep Yadav, who starred in India's five-wicket win over the West Indies in the first T20I here, said his long stint with Kolkata Knight Riders in the IPL helped him do well on Sunday.

Kuldeep, who returned match-winning figures of 3/13, restricting the Windies to a paltry 109/8 in 20 overs, has been a regular feature for KKR for the last five years.

The 23-year old snared the wickets of Darren Bravo, Rovman Powell and skipper Carlos Brathwaite in a devastating spell over four straight overs in tandem with debutant Krunal Pandya.

"It plays a part. It's been five years with KKR. I have played all the IPL games there. It gives you massive advantage. It gives confidence as well. I know ground and wicket as well," Kuldeep told reporters at the post-match press conference.

"I know the ground well, the pitch here does not offer much turn. I know the speed of the outfield and every angle. So it helps a lot and gives me immense confidence," he added.

Kuldeep also completed 100 wickets in T20 cricket. Asked about his faster delivery, Kuldeep said it helps break the rhythm of the batsman and keep him in check.

"This delivery is faster one. I am working on it. In T20 format, to break the rhythm of batsman. These kind of deliveries to control run and check what he will do."

West Indies left-arm spinner Fabian Allen, meanwhile, rued the absence of star all-rounder Andre Russell who was ruled out on the eve of the first T20 due to injury.

"Andre Russell is a crucial player in the West Indies team. He is a hard hitter. Those guys are important like Chris Gayle and Evin Lewis. Also we young players try to contribute as much as we can."

Allen, who top-scored for the Windies with a counter-attacking 20-ball 27, added that they would look to comeback in the next rubber in Lucknow on November 6.

"It's one of those days. We will look to comeback in the next game."