Southampton, Sep 1 (CRICKETNMORE):  Jos Buttler led England's fight-back with a 69 as the hosts reached 260 for eight in their second innings to take a 233-run lead over India on the third day of the fourth Test here on Saturday. 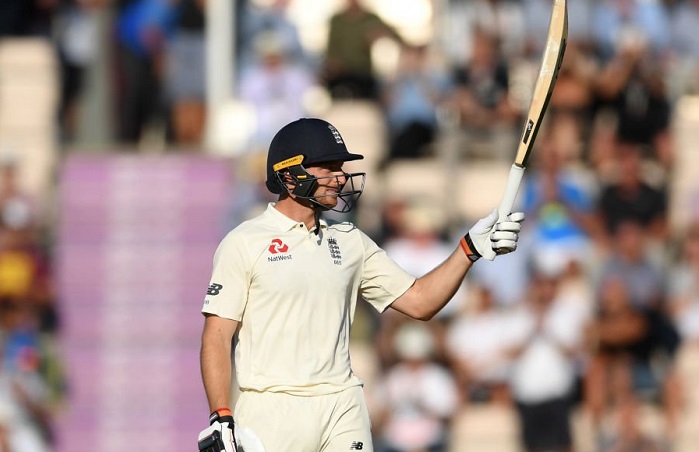 India had England on the mat at 122/5 but Buttler shared two important partnerships -- a 56-run stand with Ben Stokes (37 not out) for the sixth wicket before stitching a 55-run seven-wicket stand with Sam Curran.

Resuming the day at 6/0, openers Alastair Cook (12) and Jennings started the proceedings on a steady note but Cook who seemed good in the middle was dismissed by Jasprit Bumrah when the scoreboard read 24.

Moeen Ali (9) who was promoted up the order failed to utilise the opportunity and was sent back to the pavilion after two overs. He was dismissed by paceman Ishant Sharma in the 16th over as Lokesh Rahul took a low catch at the Rose Bowl Cricket Stadium.

Root and Jennings then steadied the innings, forging a 59-run partnership for the third wicket but the last ball of the session saw Jennings heading back to the pavilion after being adjudged LBW against seamer Mohammad Shami, with the scoreboard reading 92/3 at lunch.

In the first ball of the second session, Shami, resuming the over, removed Bairstow, who missed a pitched-up ball that rattled his stumps.

Unperturbed by the two quick wickets, Root played sensibly and rotated the strike. But just when things seemed good in the middle, a brilliant fielding effort from Shami saw the English captain going back to the pavilion as the hosts were reduced to 122/5. Shami made a direct throw from mid-on at the striker's end as Root hesitated after thinking about a single. The wicket tilted the match in India's favour as the hosts had a lead of only 95 runs.

Later, Stokes and Buttler added 32 runs to the total when umpires decided to take the tea break, with England at 152/5.

In the final session, India removed Stokes when a flighted delivery from Ashwin saw the left-hander edge it to Ajinkya Rahane at slip. It was an important wicket for the visitors as the partnership had extended till 56 runs.

After the fall of Stokes, with England at 178/6, Buttler then was joined in the middle by 20-year-old Curran. The pair played sensibly and went on to forge a 55-run partnership to take England well past the 200-run mark.

Buttler was batting comfortably until India took the new ball. Ishant's inswinging delivery kissed his pad for being adjudged LBW as India once again got back in control.

Curran continued to impress as he remained unbeaten with a 37, while Shami had Adil Rashid caught behing the wicket in the final delivery of the day.