Christchurch, March 1: Indian batters had to answer to Trent Boult's class and were reeling at 90/6, with a slender lead of 97 runs, at stumps on day two of the second Test here at the Hagley Oval on Sunday. 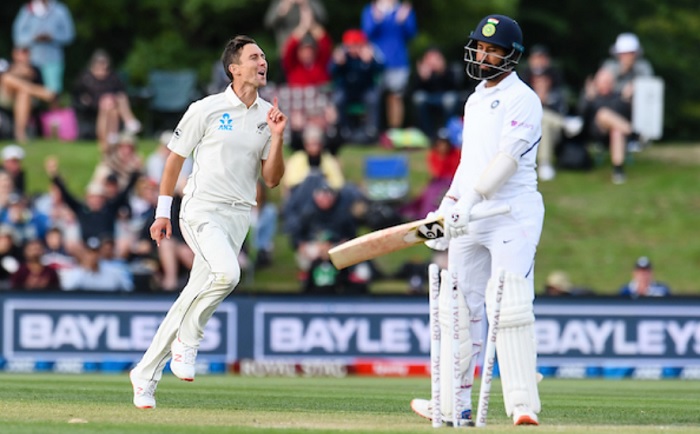 Boult ended the day with 3/12 in nine overs and was well supported by Neil Wagner, Colin de Grandhomme and Tim Southee with all of them getting a wicket each.

New Zealand were bowled out for 235 in reply to India's 242 in the first innings. A lead of seven runs meant India had to bat out of their skins to put up a fight and harbour hopes of levelling the series 1-1. But poor application, which was their bane in the first dig too, coupled with Boult's mastery with the ball saw the tourists lose their way quickly.

Mayank Agarwal (3) was trapped in front by Boult in just the second over of the innings, while Prithvi Shaw was undone by a short ball from Southee which the young batsman lobbed to Tom Latham into the cordon.

Skipper Virat Kohli's travails in this series continued as he was also trapped in front for 14 by de Grandhomme after setting him up with some excellent bowling.Ajinkya Rahane and Cheteshwar Pujara dug deep and tried to stem the rot but once the former was locked in an intense battle with Wagner, India's vice-captain lost his composure and chopped one onto his stumps to end his stay for just nine runs from 43 balls.Pujara (24) and nightwatchman Umesh Yadav (1) were castled by Boult beauties.At close of play, Hanuma Vihari (5 batting) and Rishabh Pant (1 batting) were at the crease.Earlier, Mohammed Shami took four wickets as New Zealand were all out for 235.

Ravindra Jadeja took a stunning catch to steal the show just before the tea break. Shami returned best figures of 4/81 with Jasprit Bumrah (3/62) also doing well with the ball to tame New Zealand's wagging tail after they were reduced to 142/5 at lunch.The impressive Kyle Jamieson scored 49 and shared a 51-run stand with pace colleague Wagner (21) before Jadeja took a stunning catch at deep square leg, leaping high and plucking the ball out of thin air showing extraordinary reflexes to get rid of Wagner.

Southee was the first man to be dismissed post lunch, caught behind off Bumrah. Jadeja knocked de Grandhomme (26)'s off stump with a beauty bringing Wagner to the crease.

He and Jamieson then looked to punish the Indian bowlers who have been guilty of not shaving off the tail efficiently of late.Wagner was dropped by Vihari on three off Shami, in the same over which saw the Kiwi win a review after he was given caught behind by the umpire.

Shami forced Jamieson into a pull which was caught brilliantly by 'keeper Pant to end the towering pacer's fightback.

India ended the session on a high with Jadeja and Pant being the toast at the dressing room for their outstanding catches.Earlier, Indian bowlers roared back to form as New Zealand were reduced to 142/5 at lunch.

The hosts were cruising at 63/0 when play resumed after India were bowled out for 242 in the first innings. But with Yadav trapping Tom Blundell (30) in front early on the second day, the slide started as soon the Kiwis were reduced to 142/5 with Bumrah then having skipper Kane Williamson caught behind for just 3.

Ross Taylor (15) followed suit, Jadeja having him caught at point by Umesh as Mohammed Shami then castled Tom Latham (52) who was looking good. Henry Nicolls was also gone soon after, Kohli taking a sharp catch at second slip off Shami as India went into the break with their tails up.

Earlier on Day 1, Indian batsmen played some reckless shots to get bowled out for 242.India are 0-1 down in the two-match series after losing the first Test by 10 wickets.