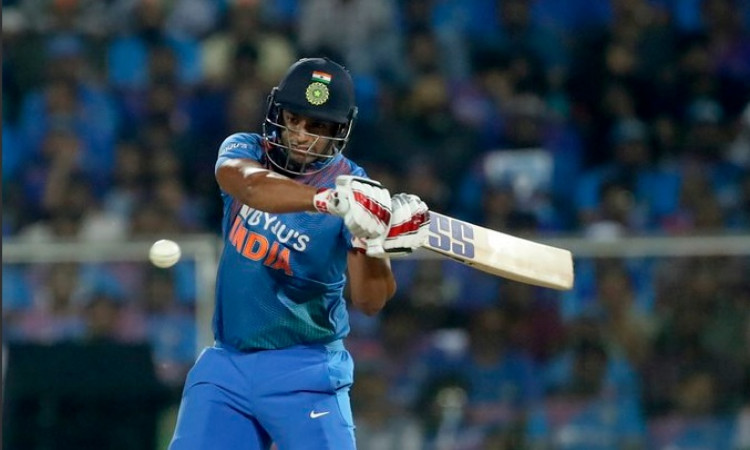 Dube was promoted to number three and he repaid the faith shown by hitting a maiden international fifty. Dube smashed three fours and four sixes on his way to 54 off 30 balls.

Dube replaced opener KL Rahul in the fourth over as India were put to bat first by the West Indies at Thiruvananthapuram's Greenfield International stadium. He got a top edge off Jason Holder in the next over but fortunately for him, it only went over the third man boundary for a four.

He then hit a six and a four off Jason Holder in the eighth over. Two balls later however, Holder dismissed Rohit Sharma to swing the momentum back to the West Indies.

Dube then went after Kieron Pollard in what was a disastrous ninth over from the West Indies captain. Pollard bowled three wides and was hit for three sixes by Dube, two of them back to back as the 26-year-old raced to 47 off 24 balls.

His captain Virat Kohli, who replaced Rohit, decided to play second fiddle as Dube ran a single to raise his maiden international fifty off the last ball of the 10th over.

But he fell while going for one shot too many. Hayden Walsh jr. was introduced in the 11th over and Dube survived when Pollard misjudged a sitter off the first delivery and the ball rolled to the boundary for a four. He then vainly attempted a pull as the ball crept safely under his bat. Dube swung at it again in the next ball and this time, it flew straight down the throat of Shimron Hetmyer at cover.

India were 97/3 in 10.3 overs at the time of Dube's dismissal and the West Indies for the most part ensured that the run rate doesn't get out of hand after that point. The next wicket to fall was that of Kohli, who unlike in the previous match never got the chance to consolidate on the start he had got. Kesrick Williams was the man who dismissed him and the pacer celebrated by putting a finger to his mouth, thus continuing the saga that Kohli said in the presentation ceremony of the previous match started in in Jamaica 2017.

Shreyas Iyer came in at no. 6 and managed to score just 10 runs off 11 balls before falling to Walsh jr. Ravindra Jadeja and Rishabh Pant managed to pull India past the 150-run mark but Williams and Sheldon Cottrell pegged the pair back in the death overs. Jadeja fell to Williams, who repeated his finger to mouth celebration while Cottrell dismissed Washington Sundar for a duck in the last over.