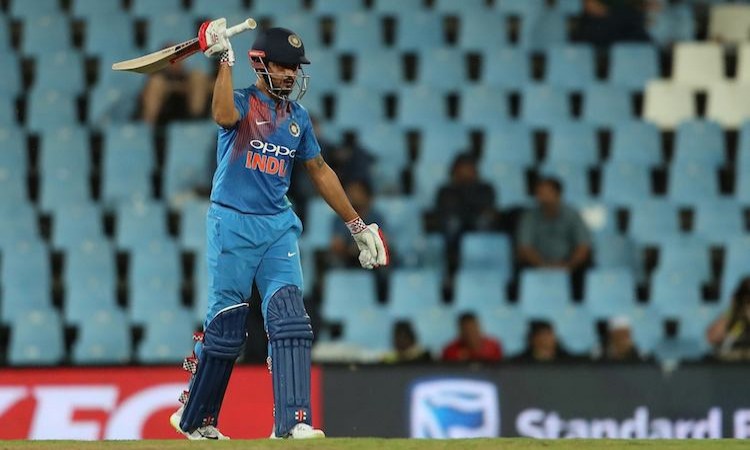 Centurion, Feb 21 - India rode on some power packed batting to post 188/4 in the second Twenty20 International (T20I) against South Africa at the SuperSport Park here on Wednesday.

Manish Pandey was the highest scorer for India with an unbeaten 79 runs off just 48 balls.

His power-packed knock, which included six boundaries and three sixes, provided the late impetus to the Indian innings.

The veteran Mahendra Singh Dhoni gave him excellent support from the other end, remaining unbeaten on 52 runs off a mere 28 balls, hitting four boundaries and three sixes along the way.

Coming together in the 11th over, the duo added 98 runs between them to carry the visitors to a formidable total.

Asked to bat first, the visitors suffered a scare off the very first ball when Shikhar Dhawan edged a Chris Morris delivery onto his pads.

The umpire had initially ruled the left-hander out but had to reverse his decision after television replays revealed a clear inside edge.

But the Indians' relief was only temporary as Dala struck the first blow for the hosts with a delivery that kept low and trapped and outfoxed Rohit Sharma plumb before the stumps.

However, the arrival of Suresh Raina saw the momentum shift to the Indians' favour as he and Dhawan started to play in an aggressive manner and dominated the South African pacers. The duo kept the Indians on track with a 43-run partnership.

That prompted South African captain Jean-Paul Duminy to come into the attack and the off-spinner had an immediate impact as Dhawan hit his second delivery into the hands of Farhaan Behardien at mid-on. Dhawan was in good touch, scoring 24 runs off 14 balls with three boundaries and two sixes.

Dala removed Virat Kohli in the next over, outfoxing the Indian skipper with some extra bounce as overjoyed wicket-keeper Heinrich Klaasen latched onto to the outside edge.

The momentum however, stayed with the Indians as Raina and Manish Pandey added 45 runs between them off the next five overs.

That was the last bit of celebration the hosts will eventually manage as Pandey and Dhoni virtually tore the Proteas' bowling apart.