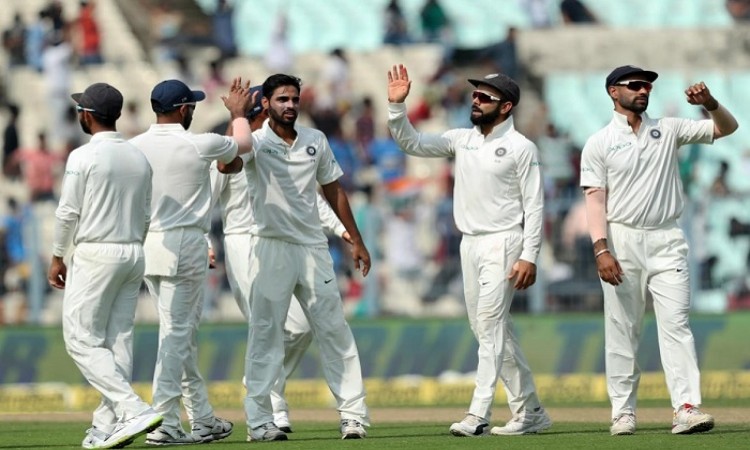 Kolkata, Nov 19 (Cricketnmore) India pacer Bhuvneshwar Kumar on Sunday said the bowlers could have been patient while trying to get rid of the Sri Lankan lower order and that they tried too hard resulting in the tourists taking a 122-run lead in the first Test here.

Replying to India's first innings score of 172, the Lankans rode veteran left-arm spinner Rangana Herath's fighting 67 to post 294 on the board after being 201/7 at one stage.

They resumed at the overnight score of 165/4 on Day 4 at the Eden Gardens.

"When we were watching how Sri Lanka were bowling, we were excited to bowl on that wicket. We tried too hard and could have stopped a few runs but the only thing we could have done is we could have been patient," Bhuvneshwar told reporters at the post day media interaction here.

Herath was involved in two decent partnerships, for the eighth wicket with Dilruwan Perera (43) and the ninth wicket with Suranga Lakmal (46).

Praising Herath's third fifty, Bhuvneshwar said they intended to get the tourists out early but the 39-year-old poured cold water on their plans.

"He batted really well. We could have got him out and sent the team packing for another 60-70 runs but that did not happen. He batted so well and it was good for the team," said the swing bowler who returned figures of 4/88 in the first essay.

"The wicket got better if you compare to those two days (Day 1 and 2) and that is quite evident with the way the batsmen are batting. There were a few bad balls which we could have improved on but overall we are happy if not completely satisfied," Bhuvneshwar said on the pitch which was green in the first two days but eased out for batters after the sun came out.

On Mohammed Shami who also picked up four wickets, all on Sunday shaving off the Lankan tail, Bhuvneshwar said: " He bowled brilliantly today and gave us the breakthroughs.

Asked about the green top and the pacers taking all ten wickets for India, Bhuvneshwar said it's a good thing "for a change."

Shikhar Dhawan scored a fluent 94 on Day 4 before getting out to Dasun Shanaka. Bhuvneshwar heaped praises on the southpaw who was guilty of playing a poor shot in the first innings. He also grassed a Lahiru Thirimanne catch on Day 3.

Bhuvneshwar backed the southpaw, adding his innings put India in a good position.

"The way he got out was unlucky. In the first innings the wicket was tough and the way he batted in the second innings, he put us in a good position," Bhuvneshwar said.