Jim Laker: The Unfamiliar Story Associated With The First Ever '10-Wicket Man'

Picking up all 10 wickets in an innings is such a rare feat that in the 144 years of test cricket, this has happened now for just the 3rd time. New Zealand spinner Ajaz Patel joined this club to accommodate Jim Laker & Anil Kumble. Kumble & Ajaz Patel had Jim Laker as inspiration, but who/what inspired Jim Laker? 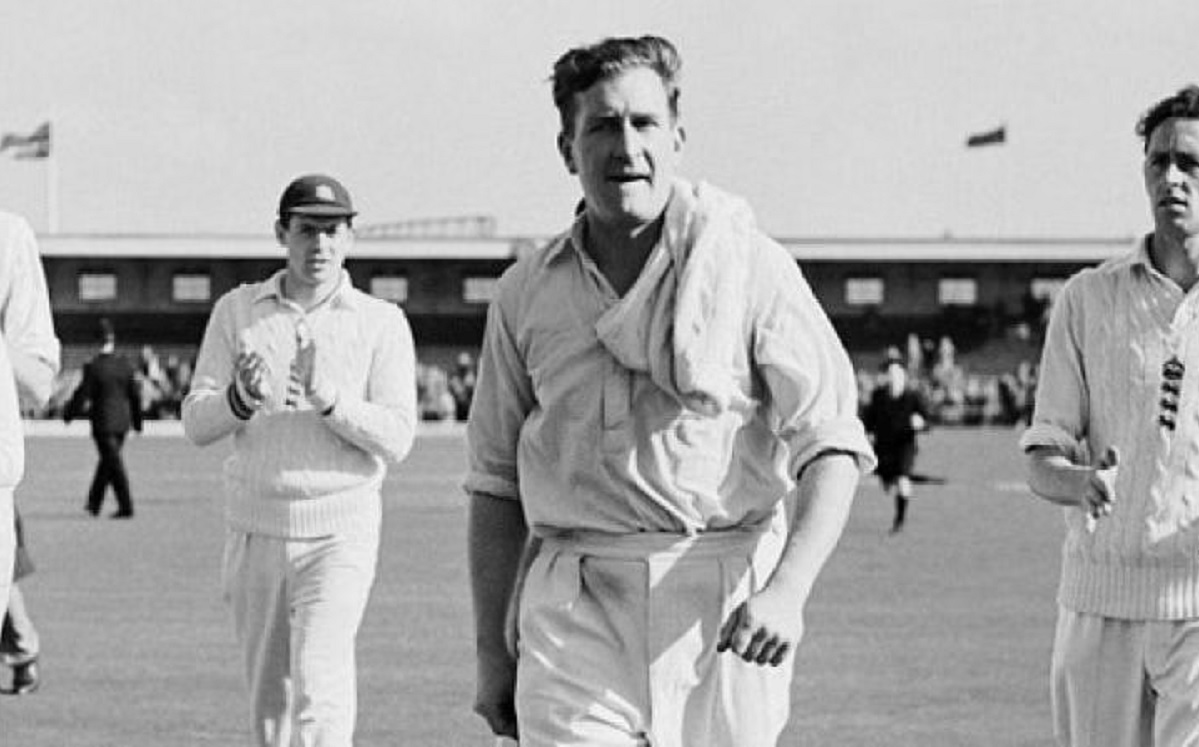 The English off-spinner's record was a rare feat, but live broadcast for matches was absent in those days, and neither the media was so passionate nor so swift as it is today. For this reason, there are many facts associated with this wonderful record that many people are unfamiliar with. Let's take a look at the journey of this record.

Jim Laker's record figures read - 10/53 (51.2 overs) against Australia in Manchester, 1956. This was the fourth test of the series which was levelled at 1-1 prior to the start of the test. The pitch was a turning track, and the English had pinned their hopes on Jim Laker's off-spin. The English captain Peter May opted to bat first after winning the toss & the team took full advantage as they posted a total of 459 runs.

At the start of Australia's innings, pacers Brian Statham & Trevor Bailey bowled a total of 10 overs. After that, when even the spin duo Jim Laker & Tony Lock failed to take a wicket, captain Peter changed the ends for both spinners. The result of this - Australia were all out for 84, and Laker recorded a figure of 9/37 in 16.4 overs and Lock took the 1 wicket.

England enforced the follow-on, and Australians managed to score 53/1 at the end of day 2. There was an unexpected change in the weather and this resulted in less than 2 hours of game time on day 3 & day 4. At the start of Day 5, Australia was at 84/2, both the wickets were picked up by Jim Laker. It started raining again on the morning of day 5 which resulted in a delayed start and the surface of the pitch was disturbed. Now there were only two possible results - England picking up 8 wickets or will Australia save the test? The sun started shining around Lunch and Laker bowled with figures of 4/3 in 9 overs in the afternoon session. Post tea, at 5:27 PM in the evening, Jim Laker dismissed Len Maddocks and scripted history, becoming the first player in history to pick up all 10 wickets. Neither Anil Kumble nor Ajaz Patel came close to the bowling figures of Laker in the Manchester test - 19/90. This match is often memorized by 'Laker's match'. Jim Laker finished with 46 wickets in 5 matches in the 1956 Ashes - only Sydney Burns has a better record than this in Ashes as he picked 49 wickets in the 1912-13 Ashes.

Jim Laker's 'Perfect 10' story doesn't end here. Years later Australian great Richie Benaud confessed that after witnessing Laker's performance in that test match, Benaud was so impressed and he changed his bowling style to match Laker's. Another wonder was the whole Old Trafford was experiencing heavy rainfall but the stadium was dry. Even fortune was favouring Jim Laker.

Before the Manchester test in 1956, the series was weirdly poised. England was on the backfoot at the start of the series. After the Nottingham test ended in a draw, the tourists registered a major win at Lords' and built a 1-0 lead. England changed the behaviour of the pitch at Headingley as they realized the spin duo of Jim Laker and Tony Lock can pick all 20 wickets. The duo picked up a total of 18 wickets in this test. After this, Old Trafford's pitch's behaviour was also altered and this caused controversy. When the test match started, all the attention was on the pitch. Len Maddocks, who was a part of the Australian playing XI in that match, wrote in his book that even Don Bradman wouldn't have survived on that pitch. To this day Australians believe that the English 'betrayed' them.

To this date, Laker's 10 wickets for 53 runs still remains the best bowling figure by a bowler in an inning. Even though Anil Kumble and Ajaz Patel have picked up 10 wickets in an inning, no one's even close to Laker's record figures of 19/90.

1956 English Cricket Season was beneficial for Jim Laker as he earned 11,086 pounds playing for Surrey county. At the end of the year, he became the first cricketer to be awarded the title of 'BBC Sports Personality of the Year'. Neville Cardus wrote a special piece on Jim Laker for Wisden. Laker was awarded £50 and the match ball for his performance.

People rarely talk about another feat that Laker achieved in that season - he took 10 wickets in an innings against Australia not once but twice. First, he did this while playing for Surrey and then in the Manchester test playing for England. This was the first time a bowler had picked all 10 wickets in an innings against Australia - after Ted Barratt in 1878.

Another unknown trivia about this match - on the morning of the test match, Jim Laker had denied playing that match. He wasn't able to sleep the night before as he was tending to his sick 3-year old daughter Fiona. However, Surrey captain Stuart Surridge denied this request and forced Jim to play the match. Surridge made Jim Laker bowl for 4 hours & 20 minutes - a record that motivated Jim Laker for his performance at Old Trafford. It's left to one's imagination that what the history would have conveyed if Laker hadn't played that test.

The luck was definitely in England's favour - as Jim Laker was playing for them. About 5 years prior to this record, Jim Laker went to Auckland to play and he admired the new country so much that he started thinking about being a permanent resident over there. Jim Laker's marriage took place before the 1951 season and due to a fine coincidence, Auckland invited Laker as a player-coach. The English off-spinner went to Auckland with his wife Lilly to play as well as for their honeymoon. In the 1951-52 season, Laker picked 24 wickets in 4 matches and was awarded 'Player of the Year' by New Zealand cricket in 1952. He stayed in Auckland for 5 months and was planning to permanently shift over there. However, Lilly didn't like this change and so Laker returned home - to create history.