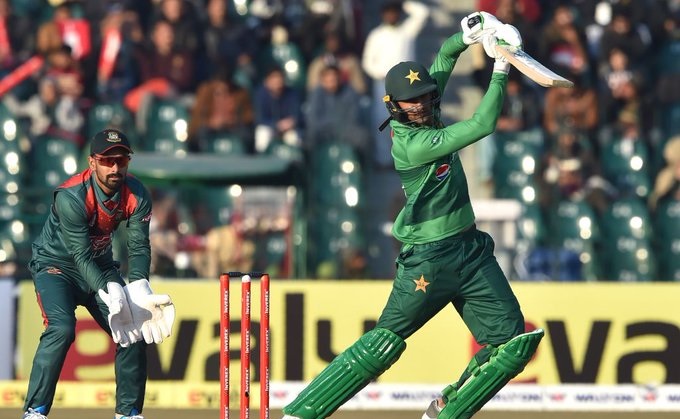 Lahore, Jan 25:  Veteran Shoaib Malik led the way as Pakistan beat Bangladesh by five wickets in the first T20I between the two sides at the Gaddafi Stadium in Lahore. Shoaib was unbeaten on 58 as Pakistan chased down a target of 142 with three balls to spare.

On a slow surface in Lahore, Bangladesh managed to get to 141/5 batting first. 71 of these runs were scored in the first 11 overs by openers Tamim Iqbal (39) and Mohammad Naim (43). But the visitors hardly had any partnership of note after that as they laboured their way to 142. Mahmudullah was the highest scorer after the openers with just 19 runs off 14 balls.

A similarly slow chase ensued after a false start for Pakistan in which they lost their captain and talisman Babar Azam off the second ball of the innings bowled by Shafiul Islam. Bangladesh were in fact in with a chance for much of the first half of the Pakistan innings. Shoaib Malik however stayed put as he kept losing partners at the other end.

For Pakistan, Shaheeh Shah Afridi was the star with the ball, giving away just 23 runs in four overs and taking the wicket of Soumya Sarkar. Shafiul Islam was the highest wicket taker for Bangladesh with his two scalps while pacer Mustafizur Rahman was taken for 40 runs in his four overs.

Pakistan have taken a 1-0 lead in the three-match series. The second match will be played in Lahore on Saturday.

IND vs ENG, 'Never play for turn on turning pitches'…