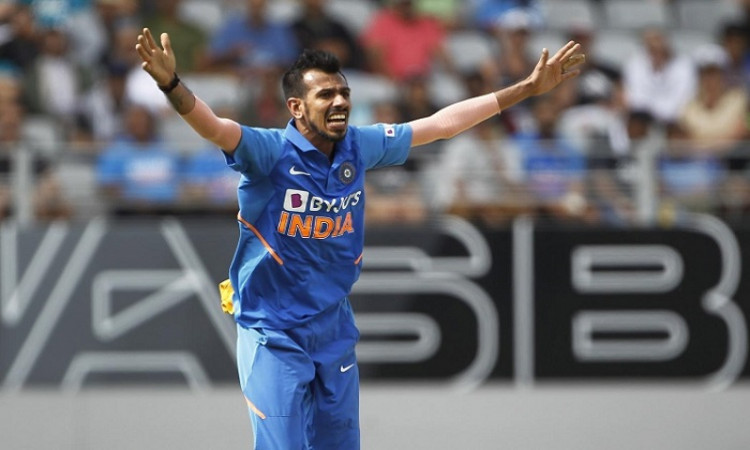 New Delhi, April 6:  India leg-spinner Yuzvendra Chahal, known for his witty style on social media, once again brought his hilarious side to the fore as he trolled IPL franchise Mumbai Indians.

Recently, Mumbai Indians shared an image of Chahal in a Mumbai Indians jersey along with MI's pace spearhead Jasprit Bumrah on Twitter. "Are you pumped-up to see Bumrah bowl to Chahal? Predict what the over will be like," the tweet read.

Also Read: How's that not out: Shane Warne reacts to clip of bowling to Sachin Tendulkar

Chahal, in reply, pointed out that for Bumrah to bowl to him, the Mumbai-based franchise will have to bowl out Royal Challengers Bangalore's entire batting line-up, including AB de Villiers and skipper Virat Kohli.

"Keep dreaming I am batting no.10 or 11. Before me finch ABD sir and king kohli is there first get them out then we will talk about my batting (sic)," he wrote.

Mumbai Indians, led by Rohit Sharma, have won IPL four times whereas the Bengaluru-based RCB have not been able to lay their hands on the coveted trophy even once.

Recently, Kohli said that his IPL franchise deserves to win the title.

Speaking in a candid interview with former England captain Kevin Pietersen on Instagram Live, the 31-year-old said that his side managed to reach three finals, but the trophy has eluded them.

"We have reached three finals but haven't won. We deserve to win a title. At RCB, we get talked about so much as we had stars. The more you think (about winning the IPL), the more it keeps running away from you. There have been added pressure lately but we need to just enjoy and not take pressure," said Kohli.

The 13th IPL edition was slated to start from March 29 but it now stands suspended till April 15 due to ongoing coronavirus pandemic which has claimed thousands of lives across the world.

Are you pumped-up to see Bumrah bowl to Chahal?