Nattakan Chantam, the lone Thai player to play in the Women's T20 Challenge, got to face a solitary ball in Trailblazers' three matches. Still, the livewire fielder won all-round applause with an extraordinary dive near the boundary line that saved a certain four against Supernovas in the final that her team won. 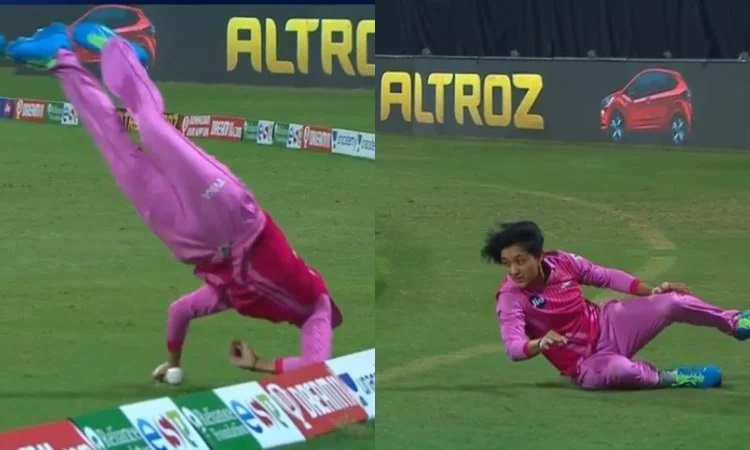 Nattakan's jaw-dropping effort was akin to a swimmer's dive in a pool, and she didn't seem to worry one bit about an injury that it might have caused. Chasing an outside edge off Jemimah Rodrigues's bat off a ball from Sophie Ecclestone, 24-year-old Nattakan gave her all to prevent the ball from crossing the boundary line.

That effort, which saved two runs for her team, came in the second over as Supernovas chased Trailblazers' 118 for eight wickets in 20 overs at the Sharjah Cricket Stadium.

The video clip of Nattakan has since gone viral and won praise from many, including contemporary players like England's Kate Cross. "Worth it for this piece of fielding though," Kate wrote while commenting on a tweet that attached the video of Nattakan's effort.

Standing at a short third man position, Nattakan sprinted towards the boundary like a 100m sprinter and stopped the ball crossing the rope. And just when she realized that the ball might win the race, Nattakan put a stunning dive near the ropes and flicked the ball back, making a save that stunned many.

"I just saw a boundary save in the women's T20 challenge from Chantam that was as good as anything I saw in 59 IPL matches this season!" tweeted commentator Joy Bhattacharya.

Later in the Supernovas' innings, Nattakan took a brilliant catch at cover-point to help dismiss the dangerous Jemimah off-spinner Deepti Sharma. Jemimah managed just 13 off 16 balls, and her team was eventually restricted to 102 for seven wickets in 20 overs, which gave Trailblazers' their maiden title with a 16-run verdict.

Earlier in the final, when Trailblazers batted, Nattakan got to play the last ball of the innings and was run out for naught. It was perhaps her desire to overcome the disappointment of not getting the opportunity to bat in two earlier matches and getting failing to contribute in the final that motivated her further in the outfield.

Recently, West Indies' Nicholas Pooran had come out with a stunning fielding effort during the ninth match of the Indian Premier League.

In the eighth over of Rajasthan Royals' chase of 224 against Kings XI Punjab, Sanju Samson had played a pull shot off Murugan Ashwin. Pooran, standing at deep mid-wicket, dived full length over the rope to catch the ball.

The West Indian caught the ball while hanging in the air and realizing that he wouldn't be able to get back inside the boundary line with the ball, he threw it in -- all the while being suspended in thin air - and saved a certain six.