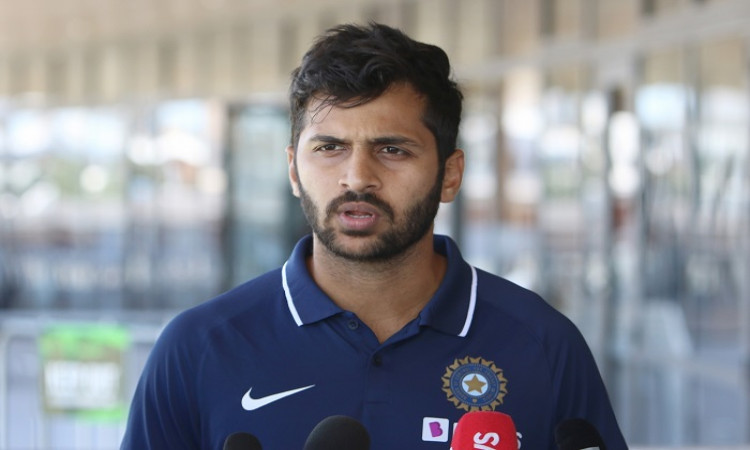 Mumbai, Feb 18: Shardul Thakur would like to forget his tour of New Zealand in a hurry. But the India pacer feels he can pick up steam in the upcoming Indian Premier League (IPL) and take the momentum forward as he eyes a T20 World Cup berth.

Shardul was taken to the cleaners in both T20Is and one dayers as India first won the T20 series 5-0 only to lose the ODIs 0-3.

"Definitely, the IPL is important and the momentum we gain from the IPL will be crucial going forward. There is the Sri Lanka T20s coming up and we are going to Zimbabwe after IPL. Then we are playing Asia Cup going into T20 World Cup.

"So whatever momentum we gain from IPL will be important and will be crucial going ahead. We just need to carry (it) forward in the tournaments after IPL," Shardul said at an event here. He will be playing for Chennai Super Kings led by MS Dhoni.

Asked about how tough it was in New Zealand, he said it was a learning experience.

"I will study my mistakes and consider them as learning experiences. It was only my first trip to New Zealand and as compared to the other players, I have not played as many games for India.

"Currently, I am just into that phase where I am gaining experience and going forward, I will try to produce greater contributions for the team's cause," he said.

"(If) we are defending (then) in the last over the team will have 16 runs instead of 10 runs. Or if we are bowling first, we will have to score those many less runs. That's what I keep telling myself.

"You just have to keep your head high and keep trying and executing things," he explained.

He said he has his eyes on the T20 World Cup in October, stressing that his confidence and positivity will help the Virat Kohli-led team.

"Certainly I have my eyes on World Cup. The positivity that I bring into the game and the amount of confidence I have, the way I am passionate about the game will help the team to win the World Cup or at least do the job fairly," he said.

Shardul also spoke about his batting skills, saying he has done it in the past, too, at the school and university level.

"I always believed that I could bat and make useful contributions for the team. Whenever I played for my school, college or domestic team, the role never changes. If I am playing international cricket, my role remains the same.

"Whenever I am batting at 9/8/7, I can get an opportunity, I have to just go out there, read the situation, play accordingly and score as many runs as I can," Shardul added.