Worshipping Sachin, Yashasvi Jaiswal made it from tents to India dressing room 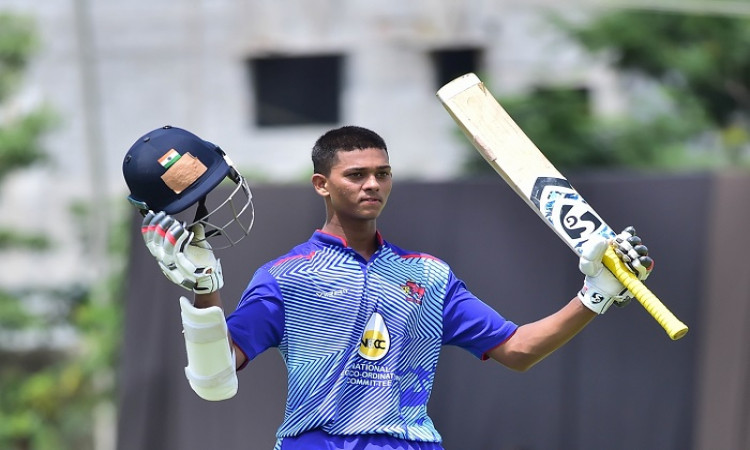 Mumbai, Dec 13:  Seventeen-year-old Yashasvi Jaiswal has been making the headlines ever since he became the youngest batsman to score a double-hundred in List A cricket.

At 17 years and 292 days, Mumbai opener Yashasvi scored 203 runs during the Vijay Hazare Trophy match between Mumbai and Jharkhand in October.

His performance in the Vijay Hazare Trophy led to his selection in the India squad that will travel to South Africa for the Under-19 World Cup slated to be played next year in South Africa.

However, things didn't come easily for the young prodigy. Hailing from a small village of Badohi near Varanasi in Uttar Pradesh, Yashasvi had to go through a lot of hardships on his way to make a place in the Indian dressing room.

From living in tents with no electricity and toilets to selling pani puris in the streets of Mumbai to make his ends meet, the 17-year-old had to struggle a lot.

"I love cricket and playing the sport gives me immense joy and pleasure. I used to watch Sachin Sir bat and from that time onwards, I wanted to be in Mumbai and represent Mumbai," Yashasvi told ICC.

"When I came here (Mumbai) with my father, I used to visit Azad Maidan. I loved playing cricket there. I started practicing at Azad Maidan but my father said: Let's go back home (Uttar Pradesh). But I said: I will stay here and play for Mumbai."

His father being a shopkeeper didn't have that much money to stay in India's business capital and decided to go back to Uttar Pradesh. But Yashasvi didn't as his focus was only on to play cricket and follow his idol - Sachin Tendulkar.

"I took all my stuff and came to Azad Maidan. At that time, a match was happening and Pappu Sir told me that I performed in that match, there would be a tent for me to stay in."

"During the summers, it used to be very hot and during the rainy season, water would find its way into the tent. It wasn't easy for me to stay there but the only thing running in my mind was to play cricket," he added while elaborating about his hardships.

"During those times, I didn't get much support from my family on the monetary front. So, I used to sell pani puris in the evening and earn some money."

Like every other kid, Yashasvi too felt embarrassed when his fellow mates used to come to eat pani puris at the shop he worked.

"It was an embarrassing situation for me when the players with whom I used to play with, would come to have pani puris at the shop where worked in."

"I used to feel so bad because I would score a century in the morning and in the evenings, I used to sell pani puris. It didn't matter whether it was a small job or not, that job itself was important for me. Yet, my only focus was on cricket," he added.

However, his life took a drastic turn when he met Jwala Sir, who advised him not to think about other things but to focus just on cricket.

"I was tired of doing all this. I didn't know what to do. One day, I was practicing at Azad Maidan, Jwala Sir saw me. He asked me what I was doing here. After that my whole life changed.

"I didn't have money to buy food and I didn't have a place to stay. However, Sir told me just to focus on cricket and then he would take care of everything else.

"I got selected to play for Mumbai in the Vijay Hazare Trophy in 2019. I went for the match and created the record of being the youngest to score a double hundred in List A cricket," he added.

For the Mumbai opener, this is just a start and his focus is on following the process and not to think about the result as it would come "on its own".