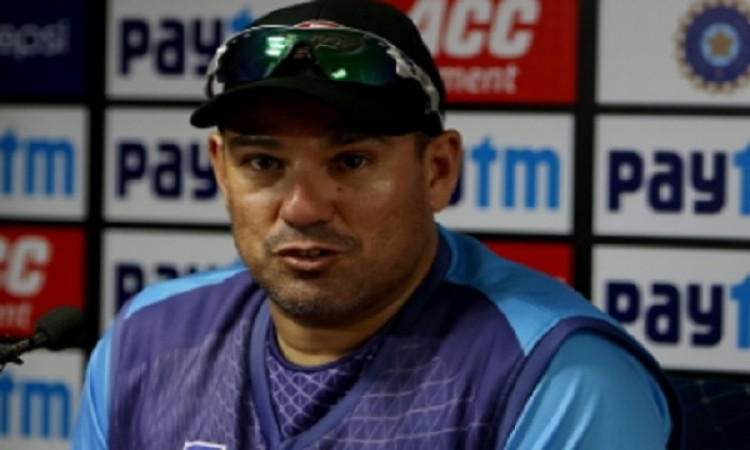 Nagpur, Nov 10 Bangladesh coach Russell Domingo said that his side stands a chance to upset India in the third T20I if they can target the hosts' inexperienced bowling attack effectively. The series is level at 1-1 going into the final game with Bangladesh recording their first ever win over India in T20Is in the first match.

Also Read: BCCI to hold AGM on December 1 in Mumbai

India were pegged back by a difficult batting pitch on which they had to bat first in the first T20I. Mushfiqur Rahim then took apart the opposition attack in the death overs and led Bangladesh to victory.

In the second match, it was India who batted second and Rohit Sharma's 85 off 43 balls powered their run to victory. Domingo felt that Bangladesh would have stood a chance in that match had they managed to set a higher total.

"I think dew has affected (the games). Toss has played a role, both teams batting second have come around top but look if we had got 180-190 in the last game, we would have given ourselves a better chance. That was really no excuse in terms of not playing well," he said.

Domingo was also confident that fast bowler Mustafizur Rahman would come good in the final game. The 24-year-old is coming back from a brief spell on the sidelines due to injury and is yet to have a major impact in the series. "He is a quality bowler. He is a match winner, and our most experienced bowler. We know that a big performance is just around the corner," Domingo said.

"Bowlers are under pressure in this format, particularly with a wet ball against top quality batters on a good wicket."

Domingo however gave credit to his team for being in a position to possibly secure an unlikely series win going into the last match. They came into the series on the back of a players' strike that threatened the tour, followed by the banning of talismanic captain Shakib Al Hasan for at least a year by the International Cricket Council. They are also without star batsman Tamim Iqbal.

"It has been a tough couple of weeks before this tour, but the players deserve a lot of credit. The energy and desire they have shown in the last 10 days has been fantastic. They were willing to try new things. They are playing against a quality side away from home," he said.

"If someone said to us two weeks ago that we will be one-all coming into Nagpur, no one would have believed it. So we are pretty happy where we are, and it is a great opportunity tomorrow.