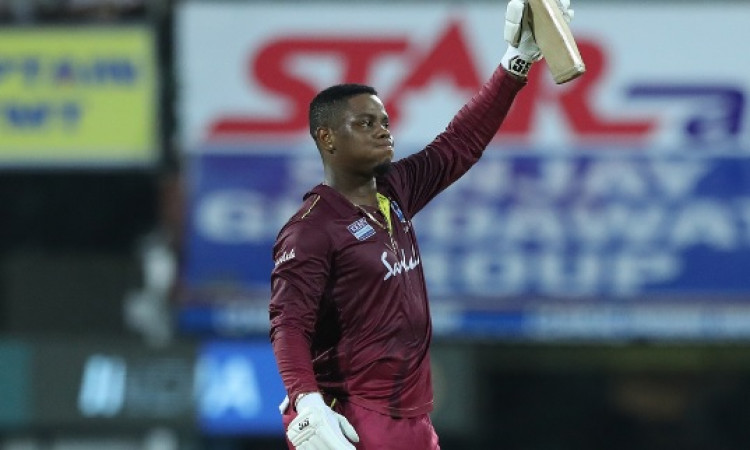 Chennai, Dec 15  Shimron Hetmyer cracked a career-best 139 while Shai Hope scored an unbeaten 102 as the West Indies romped to a eight-wicket victory against India in the first One-Day International at the M.A. Chidambaram Stadium here on Sunday.

Chasing a challenging 288 for a victory on a sluggish wicket, 22-year old Hetmyer took 106 balls for his sensational 139 which was studded with 11 fours and seven huge sixes. The left-hander was dropped on 106 by Shreyas Iyer off Deepak Chahar but most of the damage was already done by then.

Wicketkeeper batsman Hope gave Hetmyer excellent company with a patient 102 off 151 balls (7x4, 1x6), bringing up his hundred in 149 balls by hitting Chahar for a six and a four in the 47th over.

The pair shared a mammoth 218-run partnership for the second wicket. The Windies lost Sunil Ambris (9) early, trapped in front by Chahar who was the only bowler who looked good for India on a rare bad day in office for Virat Kohli's men.

But once Hetmyer and Hope got together, there was no looking back for the tourists as the pair mixed caution with aggression and made India feel the need for a fourth bowler with allrounders Shivam Dube and Ravindra Jadeja going for plenty.

While Hetmyer played in his usual aggressive manner, hitting Ravindra Jadeja for 16 runs in the 22nd over, Hope held one end up and made sure they did not lose wickets. He got to his 50 in 92 balls as Hetmyer raced to his fifth century from just 85 deliveries.

In the 35th over, Iyer dropped him at long-on off Chahar and the destructive batsman made the team pay by smashing Jadeja for two consecutive sixes in the next over.

Hetmyer finally holed out to Iyer on the midwicket boundary off Mohammed Shami in the 39th over but with 58 more required from 11 overs, it was too easy in the end as Hope and Nicholas Pooran (29) joined hands for an unbroken 62-run stand to guide the team home with 13 balls to spare. West Indies scored 291/2 in 47.5 overs.

Earlier, Shreyas Iyer and Rishabh Pant slammed fluent half centuries as India's middle order came to the party to help the hosts post 287/8.

This was Iyer's third successive fifty while Pant struck his maiden half century to put behind flak that he has been drawing for his poor form in recent times. Back in the team after a break, Kedar Jadhav also helped the cause with a 35-ball 40 (3x4, 1x6).

The hosts were reduced to 25/2 in the seventh over with opener K.L. Rahul (6) and skipper Virat Kohli (4) back in the hut early.

Sheldon Cottrell unfurled his salute twice in the seventh over as his double strike silenced the home crowd.Rohit Sharma (36) and Iyer then resurrected the ship somewhat with a 55-run stand for the third wicket but just as the pair looked settled, the India vice-captain mistimed a pull to midwicket where the Windies' skipper Kieron Pollard completed an easy catch off Alzarri Joseph.

Iyer and Pant showed a lot of maturity to see off the initial period and get used to the slow surface to then build on their respective innings.

Pant got to his maiden half century in 49 balls and was lucky to survive as he was dropped by Cottrell at cover off Pollard when he was batting on 56.

Iyer, meanwhile, flicked a Joseph delivery straight to Pollard to miss out on a hundred while Pant could not make the most of his reprieve, holing out to Hetmyer at deep square leg in the 40th over.

Jadhav and Jadeja did well for a quickfire 59-run partnership but once Jadhav was removed by Keemo Paul, Windies reined in and conceded only 38 runs in the last five, taking three wickets.

Jadeja's run out was bizarre as South African umpire Shaun George asked for a third umpire for review only after replays showed the batsman was short of his crease.