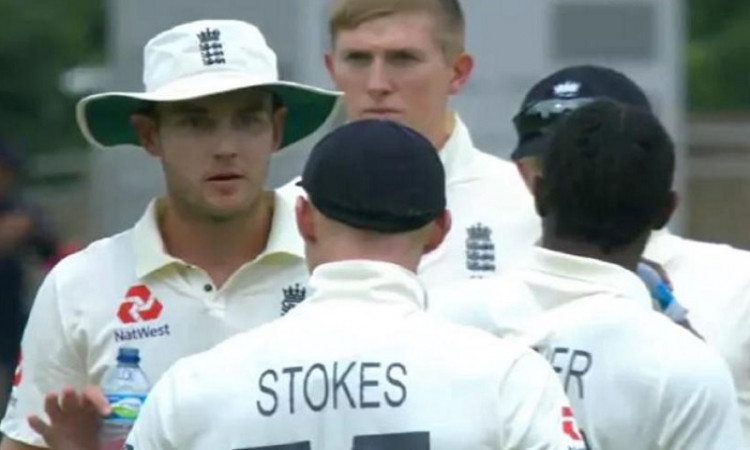 Centurion, Dec 29:  England's tour of South Africa didn't got off to a positive start with many of their players falling victim of illness, while two of their star players -- Ben Stokes and Stuart Broad -- were seen involved in a heated argument during the third day's play of the first Test at the SuperSport Park here.

A video surfaced on social media where Stokes and Broad were seen having a heated argument on Saturday. The reason behind the spat is not yet known.

Also Read: We were not at the top of our game: NZ skipper Kane Williamson

Former England captain Nasser Hussain and West Indies' legendary fast bowler Michael Holding, who were in the commentary box, were also surprised by the incident.

"Well that doesn't look like a very friendly conversation, does it? Not too sure what started it, but hopefully it will end soon," Holding said.

"When Dwaine (Pretorius) was on his way out to bat, there was a little bit of a conversation between the captain (Root), vice-captain (Stokes) and Stuart Broad. Not too sure what it was all about, what started it, but obviously the vice-captain was not a very happy man," he added.

Replying to the West Indian, Hussain said: "Tempers fray but I'm pleased that a few words were exchanged, to be honest. Got a problem with each other, Broad said something in the huddle that Stokes is not amused with and Engand's vice-captain picks him up on it. Don't have a problem with that at all."

South Africa had bundled out the visitors for 181 after putting 284 on board in their first essay. Later, the Proteas scored 272 runs in their second innings to set a challenging 376-run target for the visitors.

Proof, once again, that South African sporting cameramen are good at picking up controversial stuff