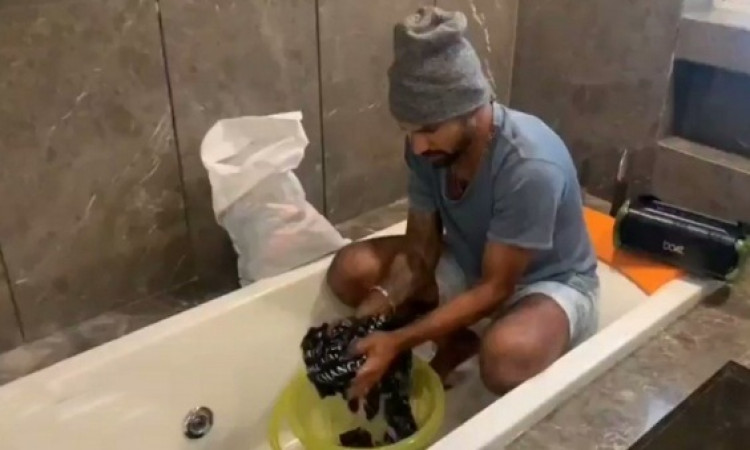 New Delhi, March 25: At a time when people have been advised to stay home over the next 21 days during the ongoing coronavirus pandemic, celebrities from all walks of life are taking to social medial to share how they are spending their days.

India cricketer Shikhar Dhawan, who is also in isolation with his wife Ayesha and son Zoravar, recently posted a hilarious video, showing how a husband has to tolerate the tantrums of his better-half playing to the tune of Bollywood hit 'Jab se hui hai shaadi'.

In the funny clip, the 34-year-old can first be seen washing clothes while sitting in a bath-tub. Ayesha was spotted doing her make-up, standing in front of a mirror. Dhawan continuously asked for respite, folding his hands, but Ayesha didn't budge.

Thereafter, Ayesha can be seen talking on the phone even as Dhawan cleans the toilet. Ayesha also has a stick in her to make sure that Dhawan doesn't back away from performing his duties.

Dhawan uploaded the video with a popular Bollywood song in the background with a caption: "Life after one week at home. Reality hits hard #AeshaDhawan @BoatNirvana #boAtheadStayINsane."

All sporting events have been cancelled or postponed in the wake of the coronavirus. India's three-match ODI series against South Africa would have marked a return to international cricket for Dhawan after he had sustained an injury during the ODIs against Australia at home earlier this year.

He subsequently missed India's tour of New Zealand but was named in the Indian squad for the ODIs against South Africa which were ultimately postponed.

Life after one week at home. Reality hits hard