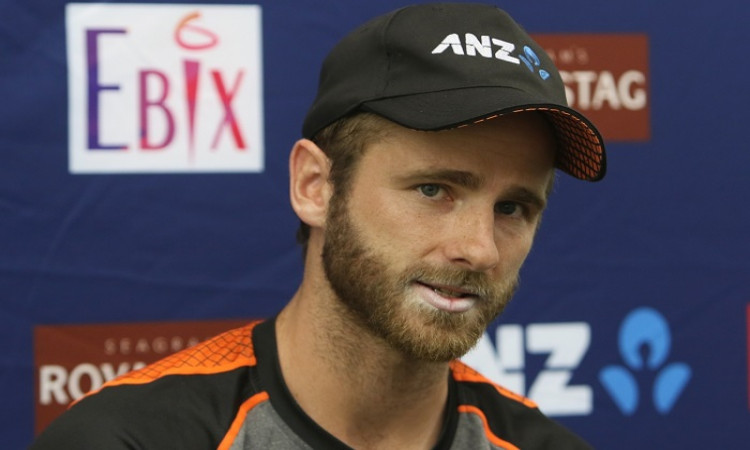 Wellington, Feb 24:  New Zealand skipper Kane Williamson lavished praise on his side after they defeated India by 10 wickets in the first Test on Monday.

Winning the toss, New Zealand first bundled out the visitors for a paltry 165. Their lower-batsmen then showed immense resistance as they were able to secure a massive 183-run lead which turned out to be too much for the Indian batsmen as they could only manage 191 in their second innings, setting up a nine-run target which the Black Caps achieved without any hiccups.

"It was an outstanding effort over the space of four days. We know how strong India are all around the world. The effort in the first innings and then a competitive total with the bat was great. The lower order runs are important to get a bit of a lead," Williamson said at the post-match presentation ceremony.

Experienced New Zealand pacers, Tim Southee and Trent Boult, led the bowling and shared nine wickets between them when India came out to bat the second time.

Southee returned with match figures of 9/110 while Boult picked up five wickets in the game giving away 96 runs in the two innings.

"We didn't know what to expect from the pitch on the morning of the Test. Because it wasn't as windy this week, there was a bit more swing. The bowlers were brilliant, but a real collective effort," said Williamson.

Tall fast bowler Kyle Jamieson also had a dream debut as he picked four wickets in the match and also contributed with valuable 44 runs to help New Zealand post 348 runs in their first innings.

"(Debutant seamer Kyle) Jamieson was brilliant. Through the summer, in white-ball cricket he's been valuable. So a great debut for Kyle as he contributed in a number of ways,"

"Southee's mindset wasn't of one with a point to prove. He just wanted to lead with the ball. Having Boult at the other end would've been good for him too. Left-arm, right-arm combination can be dangerous."

Southee, who was adjudged the Man of the Match, was pleased to help his side beat a "quality" Indian side.

"A great win, to beat a quality Indian side. Pleasant change coming back to home conditions. I think this morning was a massive moment in the game. Being able to pick up those two wickets before the second new ball was crucial," Southee said.

"As a bowling unit, to take 20 wickets and an effort like this was pretty pleasing. The wicket had more in it than usual. With the wind there, the ball did a bit more," he added.

The two teams will now face each other in the second and final Test beginning Saturday at the Hagley Oval in Christchurch.