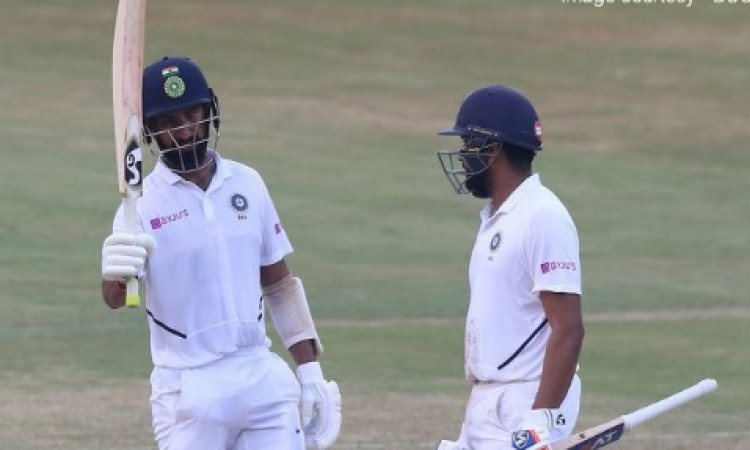 Visakhapatnam, Oct 5  Rohit Sharma and Cheteshwar Pujara struck unbeaten half centuries to help India consolidate their position and reach 175/1 in their second innings at Tea on Day Four of the ongoing first Test against South Africa at the ACA-VDCA Stadium here on Saturday. India lead by 246 runs.

The pair shared an unbroken 154-run stand for the first wicket after first innings' double centurion Mayank Agarwal was dismissed for seven. Rohit continued his good show with the bat after being tasked to open the batting, remaining unbeaten on 84 from 118 balls, his innings laced with seven fours and four sixes.

Pujara was not out on 75 off 139 balls, hitting 13 fours and one six. This was Pujara's first fifty after five innings.

Rohit, India's limited overs vice-captain, scored 176 in the first dig and brought up his fifty within 72 balls with the help of three fours and three sixes, becoming the batsman to hit most sixes by an Indian in all three different formats.

He also broke the record for the most number of sixes hit by an Indian batsman in a Test match, ealier held by Navjot Singh Sidhu.

Rohit had luck going his way as he was caught by Senuran Muthusamy on 50 at long on but the debutant stepped on the boundary padding as he tried to lob it back in for himself to take on the second attempt, awarding a six instead.

Pujara upped the ante at the other end by slapping Kagiso Rabada past bakward point for a four and then tonking Dane Piedt for a maximum to race to his fifty in 106 balls with a delectable cover drive off Kagiso Rabada.

Pujara was fortunate throughout his stay at the crease as South Africa 'keeper Quinton de Kock missed a stumping chance and a few edges went wide of him much to India's relief.

In the last hour, both batsmen played aggresively as the hosts tried to set a target as soon as possible for the tourists and try and win the match with one session and the last day remaining.

Earlier, ace off-spinner Ravichandran Ashwin picked up a seven-wicket haul to help India keep their nose ahead in the ongoing match.

The lower-order South African batsmen, especially Muthusamy, frustrated the hosts and scored valuable runs to bring down the lead less than 100.

Ashwin, who picked up his 27th five-wicket haul and 21st at home on Friday, scalped the remaining two wickets to end with figures of 7/145. Ravindra Jadeja picked two wickets while Ishant Sharma contributed with one.