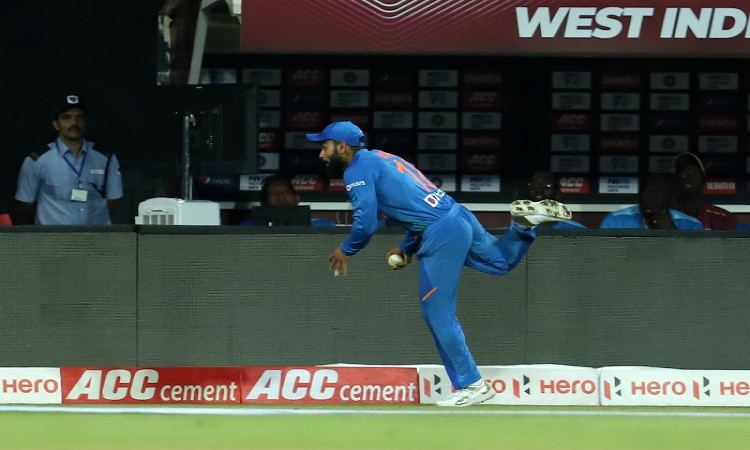 Thiruvananthapuram, Dec 8: On a day when misfields ruled India's defence of the 171-run target they set for West Indies to chase in the second T20I between the two sides at Thiruvananthapuram's Greenfield International Stadium, captain Virat Kohli took a screamer to dismiss Shimron Hetmyer.

Hetmyer, who scored a masterful half-century in the first match which helped the West Indies post a total in excess of 200 runs, was looking like he was getting ready to tee off again when Kohli put the breaks on his innings. The 22-year-old was back to back sixes off Ravindra Jadeja in the 14th over to race to 23 off 13 balls.

He hit another that looked destined to sail over the ropes for a third consecutive six but Kohli, who was standing at long-on, sprinted to his right, threw himself in the air and caught the ball.

It was his effort after that made the catch all the more impressive. He fell to the ground and seemed to be sliding towards the boundary but Kohli controlled his movement in a way that he missed the ropes by centimetres.

The wicket put an end to a 39-run stand between Hetmyer and Lendl Simmons after a 73-run opening partnership between the latter and Evin Lewis.