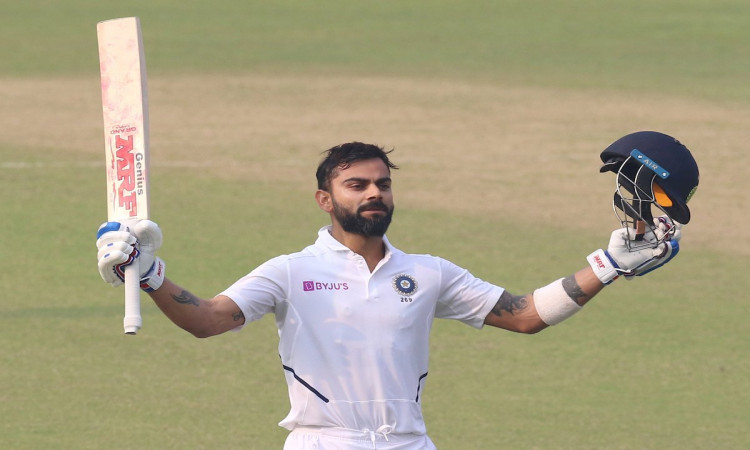 Kolkata, Nov 24: Sachin Tendulkar told Virat Kohli to treat the much-talked about twilight period in pink ball Tests as the challenging morning session of a traditional red ball five-day match, the India captain said after they beat Bangladesh inside three days and swept the series 2-0.

"The afternoon session was relatively easier. Actually, I spoke to Sachin paaji on the evening of the first day and he made a very interesting point as well. Probably with the pink ball, you have to treat the second session like the morning session when it's getting darker and the ball starts to swing and seam. So first session you invariably play like you play from lunch to tea in a normal timing test match, then the second session would be like a morning session and the last session is like that evening session," Kohlli said at the post match press conference.

Bangladesh were shot out for 106 in the first innings and India declared on 347/9 in reply to take a 241-run lead. In their second essay, the hapless tourists were reduced to 14/3 on Day 2, losing all wickets in the "twilight zone" and eventually lost by an innings and 46 runs in the first session of the third day.

India declared deep into the second session on Saturday to make full use of twilight where visibility is a problem, and reaped rewards. Kohli said in pink ball Tests, the planning changes as skipper and as batsman, the strategy is also tweaked.

"Your planning changes, declaration timing and everything changes. As a batsman, your strategy changes. Even if you are set and batting well, as soon as it gets dark and lights are on, you can be in trouble very quickly."

Kohli slammed a magnificent 136 on Day 2. The 31-year old said he was lucky to come in when the lights were on, but looked forward to making the "transition" from daylight in future.

"Luckily I went in when the lights were on, so I didn't have to go through that transition but that will be another challenge in future as well," Kohli said.

The skipper further added that the experience of coming out to bat under lights felt like IPL.

"Under lights it was a different experience. When I walked out, it felt like IPL game atmosphere. You feel like smashing the first ball but you have to remind yourself that you have to play compact.

"Also the ball was coming on faster from the pitch. It seamed a lot more under lights, swung in the first hour of the second session but seamed throughout the evening till the end of day's play. So it felt good to be in that situation where there is something new. Something to challenge you.

"As a batsman you enjoy situations where you are challenged and you have to get into Test match zone and grind a good spell of bowling out or challenging session out. I enjoyed that challenge."

This was India's 12th consecutive home series victory as they also became the first team ever to complete four successive innings victories in the five-day format. India had won the first rubber by an innings and 130 runs.