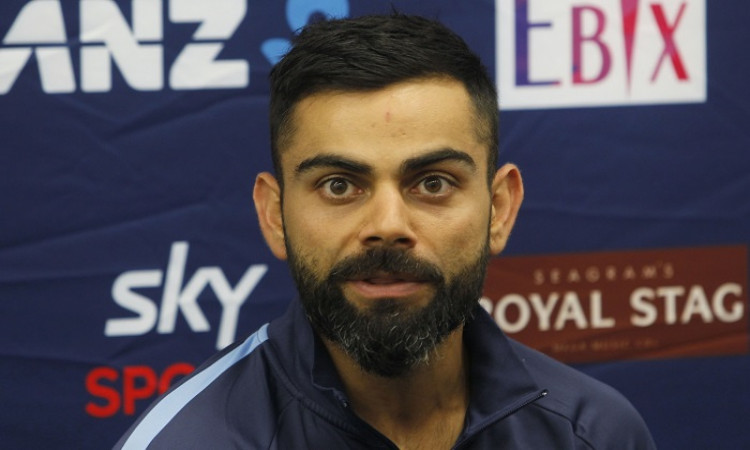 New Delhi, May 18:  India skipper Virat Kohli revealed how a priceless advice from his father helped in shaping up his career during an online video chat session hosted by India football captain Sunil Chhetri on popular social media platform Instagram on Sunday.

The social media handle of International Cricket Council (ICC) also took note of Kohli's interaction with Chhetri and they shared his father's advice for the world to see.

Also Read: If it were to happen, it would be great: Aiden Markram on South Africa captaincy

"My father was very clear that you have to study along with playing. Only when you can say 'I am 200 percent confident that I will be able to make a career out of this,' then only you will focus on that one thing," Kohli said during his interaction with Chhetri.

The ICC shared a quote card of Kohli and their post read: "India skipper Virat Kohli shared some advice from his father that helped him keep his horizons broad while growing up."

During the conversation, Kohli once again expressed his admiration for cricket icon Sachin Tendulkar.

Kohli, who is often referred to as Tendulkar's second coming in Indian cricket, spoke about the Master Blaster's iconic knock against Australia in Sharjah 1998.

"The one knock in international cricket you wished you had played?" Chhetri asked.

"Which one, the first one in the semi-final or the final?" Chhetri futher asked.

"The first one where we qualified for the final," Kohli clarified.

22 years ago, against all the odds, Tendulkar single-handedly powered India into the Coca Cola Cup final with an astonishing 131-ball 143 in Sharjah.

Although, he couldn't power India over the finishing line in the match, he did manage to drag them into the title clash against the same opposition, which India eventually won.