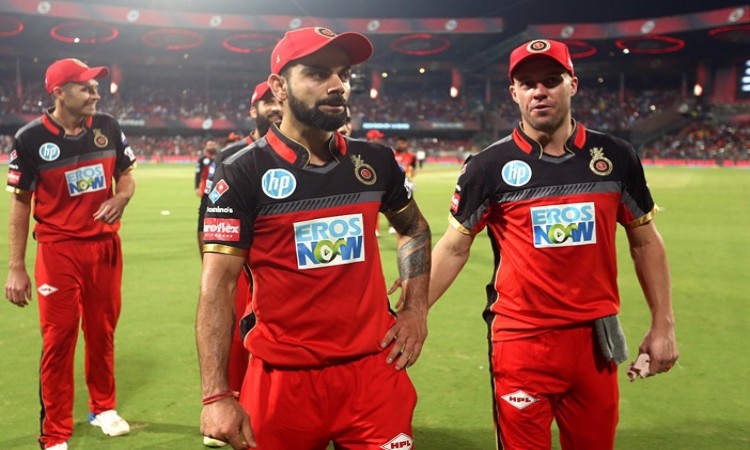 Bengaluru, May 18 (CRICKETNMORE):  With Royal Challengers Bangalore (RCB) keping their play-off chances alive, skipper Virat Kohli has credited the bowlers for a handing vital two points to his side in a must-win game against Sunrisers Hyderabad (SRH).

After putting up a massive 218-run total, the Kohli-led side managed a nail-biting 14-run win over Hyderabad, thanks to Mohammed Siraj who held his nerve to bowl a fine last over, conceding just five runs besides packing off a well-settled Hyderabad skipper Kane Williamson (81 off 42).

While the defeat wouldn't have bothered Hyderabad much as they have already made to the play-offs, the win has definately rejuvenated Kohli's men with the road to the final still not closed for Bangalore.

"I have seen many of these games before. Just had to stay calm at the end of it. After a point of time, you need to understand that the bowlers are in control of what they want to do," Kohli said after the match.

"The wicket was very good and in the second innings, there was a lot of dew. Hats off to the bowlers for maintaining the composure and giving us two points," the 29-year-old added.

Kohli also heaped praise on AB de Villers (69 off 39) and Moeen Ali (65 off 34), who together forged a 104-run partnership for the third wicket, putting Bangalore back on track after some early jolts.

"Tonight ABD and Moeen were superb with the bat with Colin chipping in. We are pretty comfortable with the side. Moeen has come in and done very well for us," the Bangalore skipper said.

"Tonight his (Ali) knock was superb and hats off to him for grabbing his opportunity. He is providing us the balance that we require," Kohli added.

He also said that the win will boost his side's morale for their another do-or-die game against Rajasthan Royals.

"We head to Rajasthan with momentum on our side. The team is feeling great. Someone stepping up every time and that is what you expect in a team game," he opined.

On the other hand, Williamson, who alomost took Hyderabad to a nail-biting win alonwith Manish Pandey (62 not out off 38) but fell in the final over, said that his bowlers would have performed a little better.

"I think if we are honest, we missed the trick a little bit with the ball. RCB were fantastic in batting, put us under pressure from ball one and got a good total," Williamson said.

The Hyderabad skipper also said that his side failed to accumulate runs in the final moments which hurt his team's run chase.

"When you're chasing, a lot needs to go your way and you need to make very good decisions. At key times towards the end, the runs didn't come," Williamson expressed.

"The boys fought hard, and we'll move forward from this," the New Zealander added.

While Bangalore will now face Rajasthan in Jaipur on Saturday, Hyderabad will host Kolkata Knight Riders on the same day.