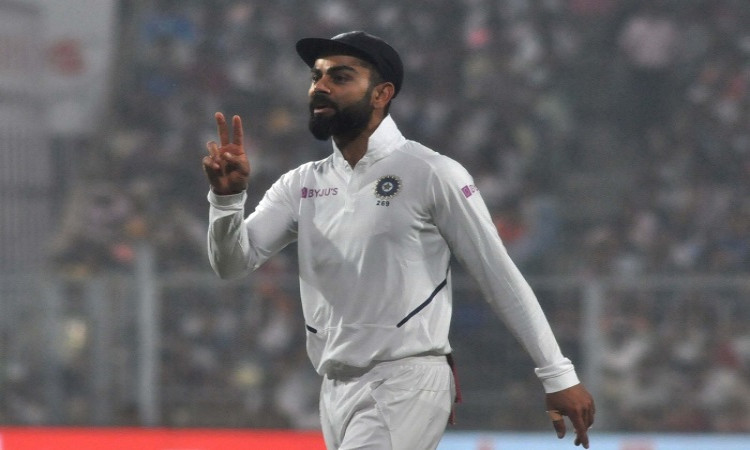 Kolkata, Nov 24:  India captain Virat Kohli put his weight firmly behind Test cricket on Sunday, saying there needs to be proper marketing of the traditional format like white ball cricket, and Test specialists need to be awarded with central contracts.

Kohli also said that BCCI Pesident Sourav Ganguly is totally in sync with him and under his leadership, Indian cricket will see "lot more positive changes which will be cricket specific."

Also Read: We need to prepare better mentally ahead of 2020 season: Mominul Haque

Ganguly's push for a pink ball Test finally saw the light of the day and in grand fashion as India hammered Bangladesh by an innings and 46 runs to complete a 2-0 series whitewash at the Eden Gardens on Sunday.

A record number of spectators thronged the stands to watch the match, even as the second Test got over inside the first hour on Day 3.

"It's crucial to market Test cricket like we do for ODIs and T20Is. It's not only the job of the players, but it spreads out to the cricket board and the home broadcasters as to how you portray a particular product to the people," Kohli said at the post-match press conference.

"If you create an excitement only around T20 cricket and not much around Test cricket, then a certain template gets established in the psyche of the fans," he added.

Kohli said Test cricket needs to be strengthened, suggesting the idea of having interaction with the fans, especially schoolchildren, during the games.

"I think if if there's enough buzz created around Test cricket, there will be a lot more keenness to come to the stadium. Like you have in venues abroad, there's something or the other happening, maybe a play area for games... Maybe schoolchildren could interact with Team India players during lunch.

"I think all these things will really add strength to Test cricket and people would want to come in and have an experience of a Test match. It should be an event where you come and experience cricket, not just sit there and watch in hot conditions. So I think there has to be more for the fans," he said.

On financially securing Test specialists, Kohli said: "If you don't keep Test cricketers in good financial condition, their motivation will go down. If a player playing for 20 overs and bowling just four overs is earning 10 times more than you, you will not see the logic and want to play T20s only. This can only be corrected through a central contract.

"See traditional countries like Australia, England and New Zealand. They are so strong because their contract structure starts from Test cricket. We have made similar changes and now Test cricketers feel they have a secured future too," the skipper said.

Kohli went on to lavish praise on Ganguly, saying the new BCCI chief is doing things for the betterment of the game in the country. Ganguly had said before that it took Kohli just "three seconds" to agree to play Day-Night Tests.

"Dada (Ganguly) has been open to all viewpoints I discussed with him. He is open to understand the viewpoint we have as a team and his vision is also in sync with us. He is also doing things for the betterment of Test cricket and in return Indian cricket will be stronger.

"We are walking in the right direction. Under him, we will see a lot more positive changes which will be cricket specific. Priority will be given to Test cricket," Kohli concluded.