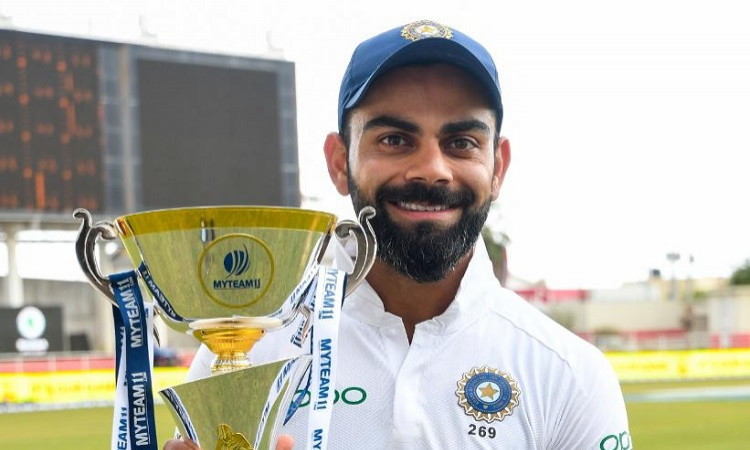 Kingston (Jamaica), Sep 3:  Skipper Virat Kohli added yet another feather to his cap as he became India's most successful captain in the longest format of the game after his team registered a thumping 257-run victory in the second Test against the West Indies to clinch the two-match series 2-0.

Monday's win at the Sabina Park took Kohli's number of Test victories as captain to 28 -- the most by any Indian captain. In the 48 Tests under Kohli, India have lost 10 games and drawn another 10.

Speaking at the post-match presentation after the conclusion of the second Test, Kohli, however, did not speak much on his achievement and credited the team for the success they have achieved in the last two years. "It's a by-product of the quality team we have here," he said.

Former India skipper M.S. Dhoni had a win percentage of 45 as captain after winning 27, losing 18 and drawing 15 in 60 matches he led the team. On the other hand, Kohli's win percentage is 58.33 -- the best among all other Indian captains in the format.

Third on the list of most successful Indian captains is Sourav Ganguly who led the team to 21 wins, 13 losses and 15 draws in 49 matches.

After winning the first Test by a record-breaking margin of 351 runs in Antigua, Kohli -- who took over the reign in 2014 following Dhoni's retirement from the longest format of the game -- had also surpassed Ganguly with the most Test wins in overseas matches for India. The 30-year-old now has 13 away wins as captain in 27 matches, while Ganguly had 11 wins in 28 games.

The record for most wins in Test cricket belongs to former South Africa skipper Graeme Smith, who led the team to 53 wins, while Australia's Ricky Ponting has 48.