Mumbai, Oct 22 (Cricketnmore) India rode on a patient century from skipper Virat Kohli to post 280/8 against New Zealand in the first of the three-match One-Day International (ODI) series at the Wankhede Stadium here on Sunday. 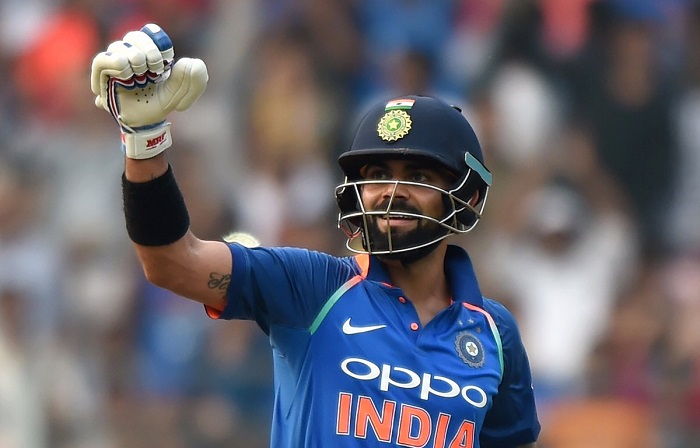 Kohli, who scored 121 runs, brought up his 31st ton in his 200th ODI. His 125-ball knock included nine hits to the fence and two sixes. Middle-order batsman Dinesh Karthik (37), making his comeback into the side, also played an important knock.

Unperturbed by the dismissals, Kohli and Karthik stood firm, punishing the loose deliveries to build a patient partnership of 73 runs for the fourth wicket.

However, the partnership was brought to an end by Southee's short-pitched delivery which found the leading edge of Karthik's bat, offering an easy catch to Colin Munro at fine leg.

Later, Kohli continued to lead the side with Mahendra Singh Dhoni (25) adding 63 runs for the fifth wicket which helped the side cross the 200-run mark.

Dhoni, who started well failed to continue his innings, after he was caught off a short length delivery by Boult.

Later, incoming batsman Hardik Pandya (16) and tailender Bhuvneshwar Kumar (26) played useful cameo knocks with Kohli. Kohli, who took charge of the innings since he stepped on the pitch was sent back in the final over by Southee's delivery which found the safe hands of Boult at long on.