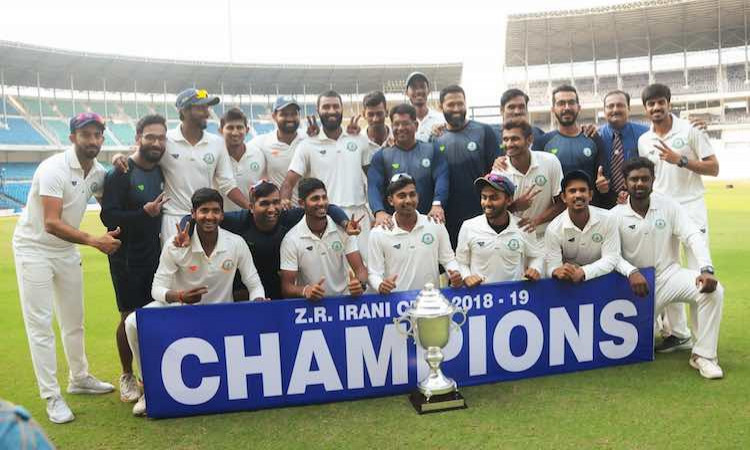 Despite the match ending in a draw, Vidarbha emerged champions on the basis of a 95-run first innings lead.

Vidarbha had scored 425 in their first innings in reply to Rest of India's 330. Later, RoI declared their second innings on 374/3, setting Vidarbha a 280 run target.

The Ranji champions had a poor start to their chase as they lost opener Faiz Fazal (0) early. However, Sanjay Raghunath (42) and Atharwa Taide (72) steadily revived the Vidarbha innings with a 116-run partnership for the second wicket.

The duo were going strong before pacer Rahul Chahar struck before lunch as he packed back Raghunath.

Taide was then joined by Ganesh Satish (87) and the duo continued to dominate their opponents before Chahar struck once again to remove Taide with the Vidarbha scorecard reading 146/2.

Satish and Mohit Kale then added 83 runs for the fourth wicket however, Dharmendrasinh Jadeja dismissed the latter to make the contest interesting.

Vidarbha was just 11 runs away from victory however, Hanuma Vihari struck at the right time to send back Sathish and deny the Ranji champions a victory as the contest ended in a draw.