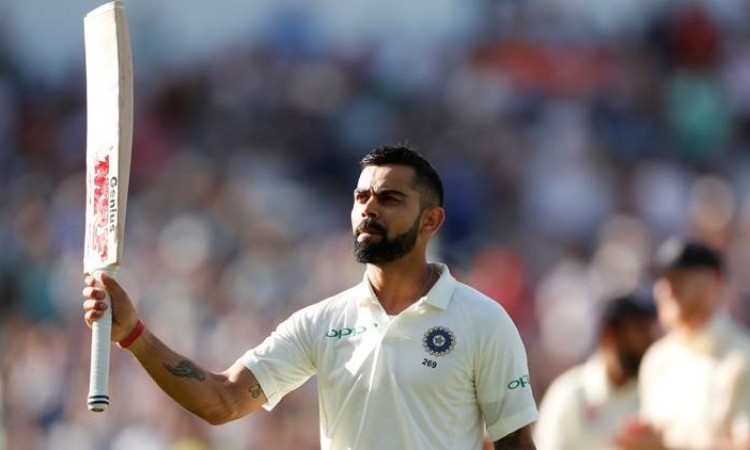 Birmingham, Aug 3 (CRICKETNMORE):  Skipper Virat Kohli, who slammed his maiden Test ton on English soil to guide India to 274 in the first innings of the series opener, said the knock was a test of physical and mental strength.

Replying to England's 287, Kohli -- dropped twice by Dawid Malan in the slips off pacer James Anderson -- scored a gritty 149, his innings laced with 22 fours and a six, to enable the visitors trim the first innings deficit to 13 runs.

"It was difficult, but I told myself that it was important to enjoy this moment and consider a challenge to take the team far and the innings deep. It was a test of physical and mental strength and I'm glad that we could come close to their total and we're pretty much in the game," Kohli was quoted as saying by BCCI.tv on Friday.

"When you help the team that way, it obviously feels great. I have to laud the tail as well," he added.

Kohli also praised the Indian lower-order batsmen for supporting him from the other end after the top and middle order collapsed.

"Hardik batted really well after we were five wickets down. Then, the way Ishant Sharma and Umesh Yadav applied themselves, I think it was an outstanding effort from them and I have to give a lot of credit to them for getting us this close," Kohli said.

"They stuck in there, supported me really well and I'm very proud of both of them and happy with the effort," he added.

"I'm not too sure, but this could come in second to Adelaide. It (Adelaide) still remains very special to me, because it was the second innings and we were chasing a target, wherein I had total clarity that we are going for the target."

Several cricket experts had said that the England tour was Kohli's final frontier. The Delhi batsman had failed to make an impact during his first tour here in 2014, when he had managed a highest score of 41.

Kohli however, insisted that he tried to focus on his game rather than what the media was talking about.

"I have mentioned these things in the pressers that I don't see or read what people write about me. People think that I'm lying, but I genuinely have no idea what people are saying. I try to prepare the best way possible that I can and help my team as much as possible," he said.

"It wasn't only about getting to the three-figure mark, but also to capitalize on the hundred. I was very disappointed when I got out because I thought we could've taken a 10-15 run lead," he added.