Test series win in India the greatest achievement of my career: Graeme Swann

London, July 15: Former England spinner Graeme Swann said that beating India in a Test series in India is the greatest achievement of his career. Swann, who retired in June 2013 was one of the architects of England's historic series win in India 2012/13, finishing joint highest wicket taker with Pragyan Ojha with 20 wickets. 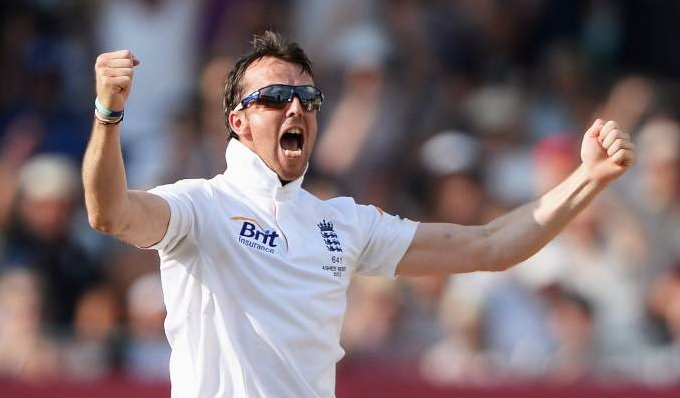 "Honestly when I look back, it is probably my greatest achievement because of what it meant to me as a spin bowler," said Swann on Sony Ten Pit Stop that was aired on the network's Facebook page.

"We went and won in Australia in 2010 but I didn't have too much to do. I just watched Alastair Cook score thousands of runs and Jimmy Anderson take all those wickets. But that series in India is one of the fondest periods of my life."

Swann and his spin bowling partner Monty Panesar took a combined 37 wickets in the series. Meanwhile, captain Alastair Cook heaped the pain on the Indian bowlers, scoring a mind-numbing 562 runs in eight innings. He was also assisted by a sublime Kevin Pietersen who scored 338 runs in seven innings.

The result looked far from being possible after the first Test in Ahmedabad however, which India won by nine wickets. Virender Sehwag scored a run-a-ball 117 while Cheteshwar Pujara scored 206 in the first innings. Yuvraj Singh's 151-ball 74 lower down the order then helped India declare on 521/8 and Pragyan Ojha took five wickets in England's first innings and four after they were forced to follow-on.

"I remember the very first day we are playing in Ahmedabad and Sehwag scored a hundred that was just brilliant. He hit Tim Bresnan back over his head for six I think before lunch on the first day of that match and we were thinking oh no, we are in a bit of bother here. We were hammered in that game but I think I got five wickets in that game," said Swann.

"And then Monty Panesar came to play the second Test in Mumbai and honestly we couldn't have played on a better wicket. Me and Monty are both similar, we bowl quite quick and get a lot of overspin on the ball. The red clay they have got in Mumbai was brilliant. The ball really bounces and fizzes and we had a field day. It was perfect for our bowling and we won that Test match.

"And then in Kolkata, the wicket was slow and low but again a very spin friendly. Suddenly we were 2-1 up in the series with only one Test to play. We went to Nagpur and the wicket was so slow and low. We should have gone all out to win it but as it was, India batted very well, so we just had to be almost defensive.

"I remember thinking, we have actually come to India and won a Test series! This wasn't supposed to happen. I expected to do well personally, I was backing myself and I wanted to get into these battles with these great players. Monty at the other end doesn't really think too much about cricket he just runs in and bowls. And he bowled beautifully. It was one of those series when everything went well for us after the first Test."

Fifth Edition Of Abu Dhabi T10 To Begin In November

'Can An Annus Mirabilis Also Be An Annus Horribilis': Gideon…

Five Batsmen With Most Runs In T20 World Cups

Don't Think Its Right To Play T20 WC Over Here…

European Qualifiers For T20 World Cup 2022 Canceled Due To…

'Relieved' Morris Reveals Insights About The 'Chaos' When Covid-19 Breached…