Melbourne, March 8:  Smriti Mandhana revealed she told a tearful Shafali Verma to be 'really proud' of her performances at the ICC Women's T20 World Cup 2020 despite a devastating Final defeat to Australia. 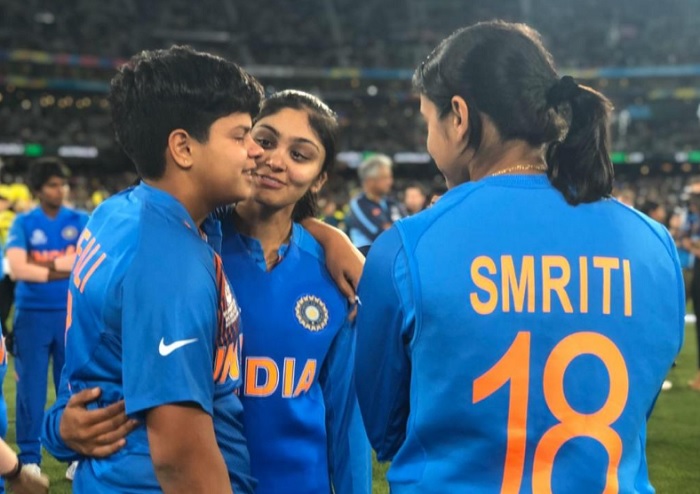 Mandhana's disappointing T20 World Cup - that saw her manage a top score of 17 in four innings - continued as India sunk to 99 all out and an 85-run loss in their first Women's T20 World Cup Final.

Teen sensation Verma was visibly distraught to only manage two with the bat having dropped Alyssa Healy on nine, with Mandhana asking for the teenager to be given time to lick her wounds.

"Shafali and I were standing almost together when we were receiving our medals. She was in tears," said Mandhana.

"I told her she had to be really proud of the kind of campaign she'd had. When I played my first World Cup at the age of 16, I couldn't hit the ball 20 per cent of what she can hit.

"She has to be really proud of the way she played, but she was upset with the way she got out.

"She's thinking already how she can be better. She should be left alone, that's the most I can tell her.

"This is a time to introspect. Failure teaches you a lot more than success. The team needs to be left alone and think of how we can be better in the next few years."

A sluggish start with the ball and in the field undermined India's attempts to overhaul the four-time champions in their own backyard with the support of a 86,174 crowd at the MCG.

Shafali was far from the only guilty party when it came to grassing chances with Rajeshwari Gayakwad dropping Beth Mooney in single figures and fielding errors ensued from the likes of Poonam Yadav.

India can reflect on their best performance at a Women's T20 World Cup, building on a semi-final appearance in the Caribbean back in 2018. Mandhana believes India are a transformed team in the shortest format, an evolution she feels lies at the feet of head coach WV Raman and represents a fine platform for the future.

"T20 wasn't a strength of the team, but the way we've played in the last eight-ten months, we have to be really proud of," she said.

"T20 was never our best format, one-day was definitely the preferred format. Now we're playing each format equally well. That is one thing the coach has helped us with and we've developed massively.

"The youngsters coming in have totally changed the set-up and the best part of the whole tournament was it was a complete team performance.

"It's not a case of just getting one or two of our players out, you have to get five or six out and that's a very good."