Team India Arrives In Sydney For Lengthy Series In Australia

The Virat Kohli-captained Indian cricket contingent arrived here on Thursday for a 69-day all-format tour of Australia beginning November 27. But Rohit Sharma, who was added to the Test squad later, has stayed back in India and will join the team later. 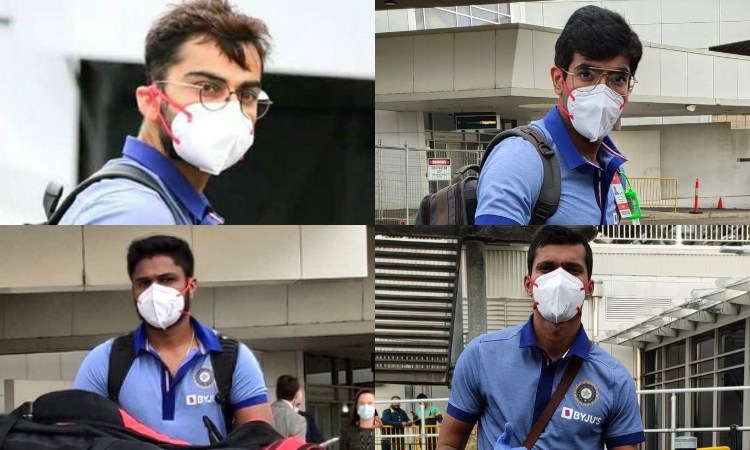 Sharma has returned to India from the United Arab Emirates for rehabilitation to his hamstring injury, after captaining Mumbai Indians to their fifth Indian Premier League (IPL) crown.

The Indian players have been allowed to travel with their families.

Along with the Indian contingent, the Australian players who were part of the IPL, including Steve Smith, David Warner, Adam Zampa, Marcus Stoinis, Josh Hazlewood, and James Pattinson, also reached the city, travelling in the same flight.

Kohli's men, in their customised PPE kits and masks, had departed from Dubai on Wednesday night after the end of the IPL.

Sharma will undergo rehabilitation at the National Cricket Academy in Bangalore. He will miss the limited-overs series, and will join the Test squad later.

The Board of Control for Cricket in India (BCCI) on its twitter handle posted pictures of some team members on arrival.

Kohli will lead India in the three ODIs, three T20Is, and the first of the four Tests, in Adelaide. He will return after the first Test to be with his wife Anushka Sharma who is due for delivery.

BCCI president Sourav Ganguly had earlier told The Age, an Australian newspaper, that he was expecting players to be allowed to travel with their families i.e spouses.

"They have already been living in a bubble for the last 80 days," Ganguly was quoted as saying by The Age last month.

Kohli has, however, not been accompanied by his wife and only a limited number of family members have been allowed by the Australian government, the Australian media has reported.

The Indian cricket team will now undergo a 14-day quarantine in the Sydney Olympic Park, with their practice nets also being set up close to it.

"The athletes will only be permitted to leave their individual rooms for designated training sessions which are expected to take place at another bio-secure venue at Blacktown International Sports Park," reported Australian newspaper The Daily Telegraph.

"The NSW Blues (rugby side) are due to check out of their Pullman Hotel home base at Sydney Olympic Park on Thursday morning, at which time the facility will be immediately locked down for the arrival of Kohli's Team India," said the paper.

The BCCI had demanded Cricket Australia that their players be allowed to train during quarantine to which the New South Wales government had agreed.