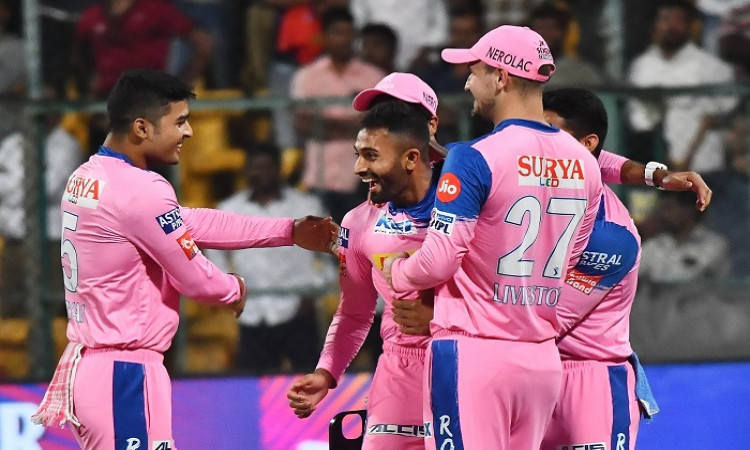 New Delhi, May 1 (CRICKETNMORE): West Indies all-rounder Carlos Brathwaite has praised Rajasthan Royal's leg-spinner Shreyas Gopal after he took a hat-trick against Royal Challengers Bangalore (RCB) in an Indian Premier League (IPL) fixture which was abandoned due to rain.

Gopal had dismissed the likes of RCB skipper Virat Kohli (25 off 7), AB de Villers (10 off 4) and Marcus Stoinis (0) to apply brakes on a fine start by Bangalore and reduce them to 62-7 in the rain-hit five-overs match at the M. Chinnaswamy Stadium in Bengaluru on Tuesday night.

Brathwaite , who plays for Kolkata Knight Riders (KKR) in IPL, took to Twitter and said, "Take a bow Gopal, you won't get much better hat-tricks than that."

The hat-trick, however, couldn't help Rajasthan snatch a victory and take home the much-needed two points as the match ended without any result after the rain came calling again.

Chasing a 63-run target, the visitors were at 41/1 in 3.2 overs when the rain came again and the match had to be abandoned.

Both the teams had to share the points after the result. The result also meant RCB are now officially out of the tournament. Whereas, Rajasthan with 11 points, will have to win their final encounter at any cost and also hope for favourable results in other matches in order to make it to the playoffs.

Rajasthan will next lock horns with Delhi Capitals at the Feroz Shah Kotla on Saturday. RCB, meanwhile, will play their last match of the season against Sunrisers Hyderabad later the same day.