The official rules for T20 cricket were established by England & Wales Cricket Board and the first tournament was played by the County Teams of England in 2003. 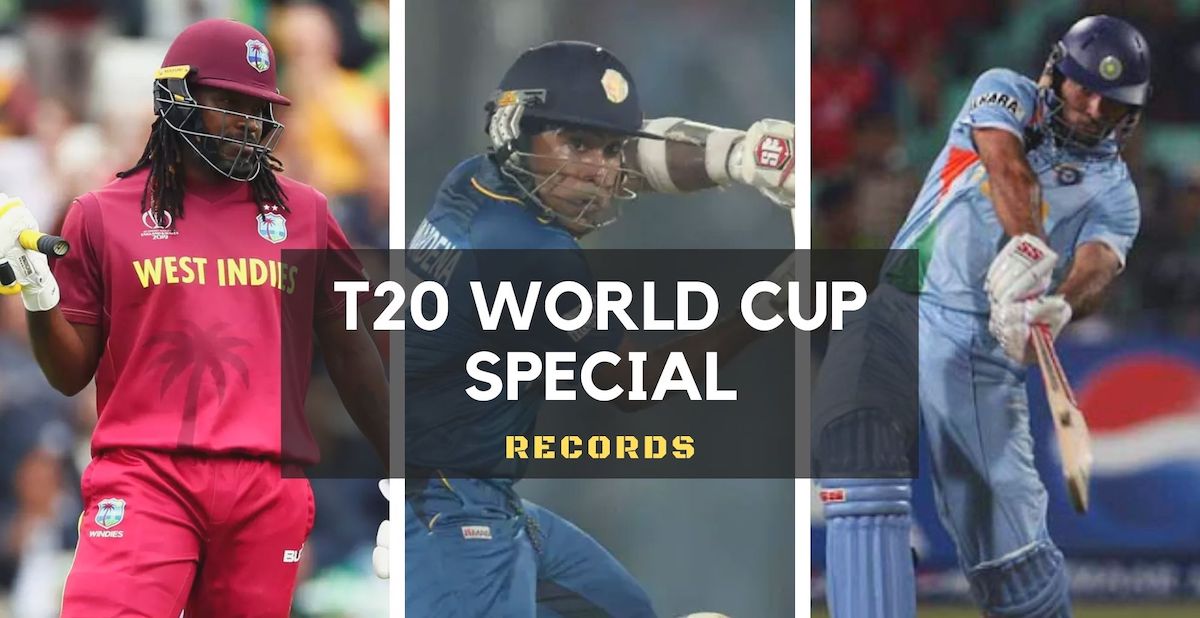 Within 2 years, in 2004, Australia & New Zealand played a friendly T20 match in Auckland, which was the first official T20. The increasing popularity of this format suggested that this vibrant format would be appreciated and enjoyed by many youngsters and other people as the game is short & interesting.

In no more than 3 years, this format reached greater heights with the inaugural T20 World Cup in 2007, which was won by India. This win by Team India created a huge market for T20 cricket in the Indian subcontinent, and consequently, BCCI developed IPL to exploit this, which even lead to the peak in popularity of T20 cricket.

T20 World Cup was last held in 2016 and is scheduled to take place after IPL 2021 in UAE. As we are nearing this extravaganza of fast-paced cricket, here are some individual records made and held over the years.

Former Sri Lanka Mahela Jayawardene has the most runs to his name in the T20 World Cups. He has amassed 1,016 runs in 31 innings, averaging 39.07 with 6 fifties and 1 century. However, in the list of top 5 run-scorers in T20 World Cups, the only active player who'd be in actin in 2021 World Cup is Virat Kohli. The Indian skipper who's playing his first & last T20 World Cup as skipper is at #4 in this list. He has scored 777 runs in 16 matches with an astounding average of 86.33.

The highest individual score in T20 World Cup is by the ace New Zealand Wicketkeeper-Batter Brendon McCullum. The New Zealander amassed 123 runs off 58 balls against Bangladesh in 2012. He smashed 11 fours and 7 sixes in this innings. New Zealand ended up winning this match by 59 runs.

In a T20 game, the strike rate is one of the most important factors. A higher strike rate means quick gathering of runs which is the ultimate motive of the game. The record for highest strike rate for a batter belongs to the West Indian all-rounder and T20 World Cup-winning skipper, Darren Sammy. Sammy has a strike rate of 164.12. He has scored 215 runs in 131 balls in the18 innings he has batted for West Indies.

Here are some other interesting individual records in T20 World Cup:

Fastest Century: Chris Gayle scored a century in 48 balls against England in 2016.

Fastest Fifty: India's prime southpaw batter Yuvraj Singh smashed 6 sixes in an over in the 2007 World Cup against England. With this, he recorded the fastest fifty in just 12 balls.

Most Ducks: Infamous for his duck scores, Pakistan's Shahid Afridi has the most no. of ducks in the T20 World Cup. Afridi has 5 ducks out of 32 innings. Sri Lanka's Tilakaratne Dilshan also has 5 ducks to his name but it came in 34 innings, two more than Shahid.

Most Sixes: Yet another record registered to Universe Boss' name, Gayle has hit the most no. of sixes in the T20 World Cup. He has smacked smashed 60 sixes during his T20 World Cup outings. Gayle and West Indies would be looking to increase this number in the upcoming T20 World Cup.

Most Sixes In An Innings: Again, Chris Gayle has the most sixes in a single match. He smashed 11 sixes against England in the 2016 T20 World Cup.

Most Fours: Ex Sri Lankan Captain Mahela Jayawardene has the most number of fours to his name, with 111 fours in 31 innings.

Most Fours In An Innings: South Africa's Herschelle Gibbs smacked 14 fours in an innings against West Indies in the 2007 T20 World Cup.

Most Runs In Boundaries In An Innings: Champion T20 player Chris Gayle has yet another record to his name: Gayle smashed 88 runs through boundaries in his innings of 117 off 57 balls, in the opening match of the T20 World Cup 2007 against South Africa.

Here are some other interesting records for a single tournament:

Most Runs In A Tournament: Virat Kohli has the record for the most number of runs in a single T20 World Cup - he has 319 runs to his name in 6 innings in the 2014 T20 World Cup.

Most Sixes: Chris Gayle has the feat of smashing most sixes in a single tournament, he has 16 sixes to his name in 6 innings in the 2012 T20 World Cup.

The T20 game is a batter dominated format, however, good bowling helps you to win a match in cricket, be it any more format. If you take 10 wickets, the match should be yours to win in most cases. Here are some bowling records from the T20 World Cups.

Shahid Afridi, the Pakistani all-rounder has the most number of wickets to his name in T20 World Cups. This spinner has picked up 39 wickets in 34 matches.

Former Mystery Spinner from Sri Lanka, Ajantha Mendis has the best bowling figures to his name. In the match against Zimbabwe in the 2012 T20 World Cup, Mendis took 6 wickets giving away just 8 runs in his 4 overs.

Ajantha Mendis also has the record for best bowling strike rate in T20 World Cups. He has a strike rate of 13.4 in the 21 matches he has played.

Mendis also hold the feat of taking most wickets in a single season. He took 15 wickets in 6 matches in the 2012 T20 World Cup.

West Indies' spinner Samuel Badree has picked up 24 wickets in 15 matches. His average is 13.58 which is the best bowling average for a bowler in T20 World Cup.

West Indian ace spinner Sunil Narine has the best economy rate among bowlers in the T20 World Cup. His economy is 5.17 in 12 matches, in which he has picked 15 wickets.

The third element of the game is 'fielding'. A good fielding performance helps build up pressure to stop the flow of runs and consequently pick up wickets. Here are a few more records related to fielding:

India's ex-captain and now mentor, MS Dhoni has the most no. of dismissals as wicketkeeper in T20 World Cups. He has 32 dismissals to his name.

South African legend AB de Villiers has the most number of catches, with 23.

While the most no. of dismissals as wicketkeeper in a single season belong to AB de Villiers with 9 dismissals in the 2012 T20 World Cup.

Australia's Mr Cricket Michael Hussey has the most number of catches in a single tournament - 8 catches in the 2010 T20 World Cup.

It'd be interesting to note that the highest win percentage in T20 World Cup belongs to Nepal, but we have disregarded it since they've played only 3 matches in T20 World Cup.

It is also interesting to be a spectator in this years' World Cup. After the pandemic hit the whole world, this is the first world cup taking place. Also, the T20 World Cup is happening after 5 years so there's greater anticipation. Only time would tell how many records will be set and broken in this edition of the World Cup.