Hobart, Oct 24 - Wesley Madhevere made up for a dreadful Zimbabwe start with an unbeaten 35 off 18 balls, while Quinton de Kock came out all guns blazing for South Africa by smashing an unbeaten 47 n 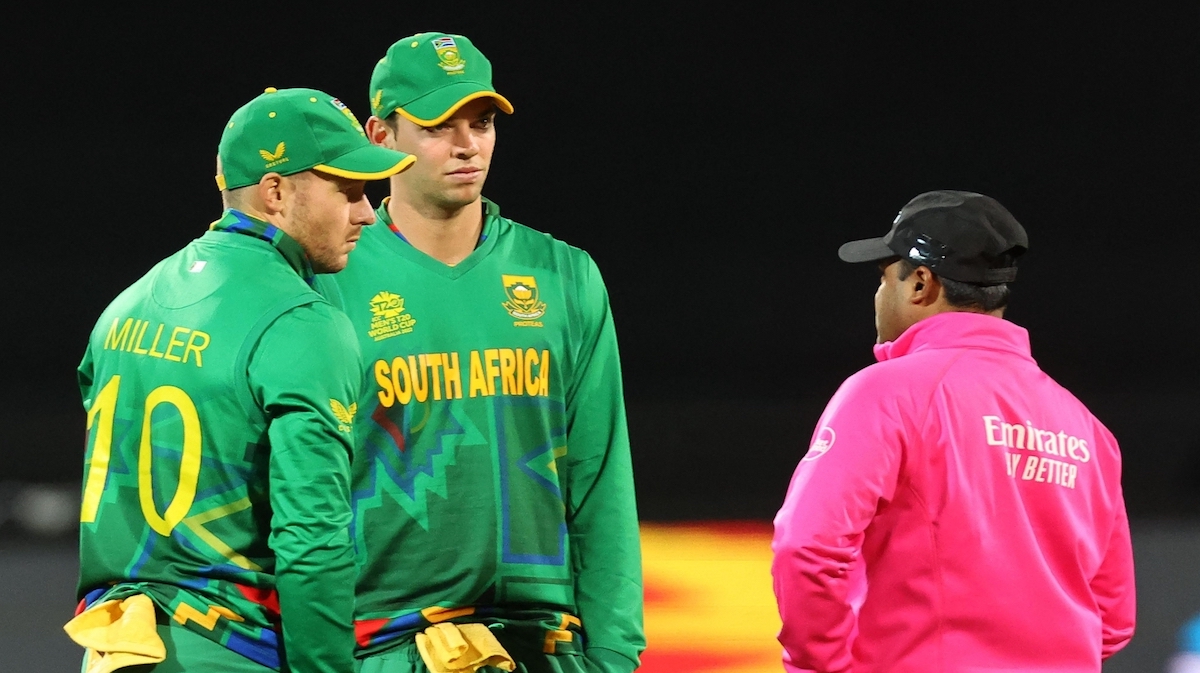 Hobart, Oct 24 - Wesley Madhevere made up for a dreadful Zimbabwe start with an unbeaten 35 off 18 balls, while Quinton de Kock came out all guns blazing for South Africa by smashing an unbeaten 47 not out off 17 balls.

But rain had the final say as the Group 2 clash in Super 12 of Men's T20 World Cup at Bellerive Oval was washed out to end in a no-result, with both teams now sharing a point each.

After Madhevere carried Zimbabwe to a fighting 79/5 in nine overs, after being 19/4 at one point, as rain caused a delay of two hours and 35 minutes in the proceedings, South Africa were well on their course to chase down, thanks to de Kock's early onslaught, laced with eight fours and a six.

Though the target was reduced to 64 in seven overs, South Africa were well within the reach to hunt down the total. But rain spoiled their well-laid plans, denying the Proteas a victory as points were split.

De Kock began with a bang, pulling Tendai Chatara for back-to-back fours in the first two balls of the innings, before a top-edge on flick ballooned over short fine leg to make it a hat-trick of fours.

De Kock further took Chatara to cleaners in the 23-run opening over, dispatching a length ball over long-on for six, followed by pulling to right of deep square leg for four more. After rain interrupted the proceedings again at 1.1 overs, the players went off the field for a while.

With the new target being 64 off seven overs and powerplay of two overs, de Kock feasted on Richard Ngarava's deliveries by slamming a hat-trick of fours through mid-off, deep square leg, cover, before cutting hard through point for the fourth four of the innings.

After that, a very gingerly Ngarava walked off the field while clutching his left thigh after slipping in his follow-through and being down on the ground as the conditions were wet, with injury concerns looming around Zimbabwe.

After three overs, South Africa were at 51/0 in three overs and needed 13 runs off 24 balls for their first win of the tournament, with de Kock striking at 261.11. But rain came down hard yet again, with the cut-off time for the match just eight minutes away. The rain Gods didn't relent for de Kock and South Africa to complete their chase and eventually resulted in the first washout of the tournament.

Earlier, after rain caused a prolonged delay in the proceedings with Zimbabwe opting to bat first at the toss and reduced the match to nine overs a side shootout, South Africa made early inroads with the ball, triggering an early collapse.

Left-arm pacer Wayne Parnell began the meltdown by having captain Craig Ervine toe-ending a slog to mid-on in the second over. In the next over, right-arm fast bowler Lungi Ngidi made double strikes, drawing feather edges on attempted cut by Regis Chakabva and Sikandar Raza trying to pull, with the wicket-keeper taking both catches in a span of three balls.

With Sean Williams run-out by David Miller in the fourth over, Zimbabwe were in deep trouble at 19/4 in 3.4 overs. That's where Madhevere stepped in to hit four fours and a six at a strike-rate of 194.44 to lead Zimbabwe's recovery.

He was elegant in his drives, pulls, cuts and ramp while sharing a 55-run partnership off 33 balls with Milton Shumba, who made 18 off 20 balls before paddling a catch behind to keeper off Anrich Nortje on the final ball of the innings.