Syed Mushtaq Ali Trophy: Rana-Sangwan Star In Delhi's Win, Round Up Of What Happened Today

A fit-again speedster Ishant Sharma captured two wickets on his return to competitive cricket after recovering from an abdominal muscle tear sustained during the Indian Premier League in October as Delhi bundled out Mumbai for 130 in 18.1 overs while the host chased the visitors' 206 for four wickets in 20 overs. Ishant, who formed a successful Indian bowling attack on the 2018-19 tour of Australia, was ruled out of the current tour of Down Under with the same injury. 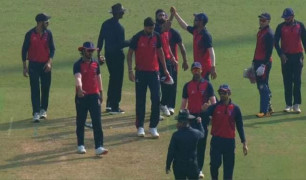 After Mumbai asked Delhi to bat on winning the toss, Dhawan (23) and Hiten Dalal (24) provided the team a decent start. Then Himmat Singh scored a rapid-fire 32-ball 53 and was involved in a 122-run third-wicket partnership with Rana (37 balls, 7x4s, 5x6s) that helped Delhi cross the 200-run mark. Down the order, Lalit Yadav scored an unbeaten 21 off just 10 balls.

As Mumbai chased 207 runs for a win, only Shivam Dube showed the will to fight as he scored a 63 off 42 balls (3x4s, 5x6s). Apart from him, the top-order batting line-up completely failed to deliver.

For Delhi, Sangwan bagged three for 20 in four overs while Ishant and Simarjeet Singh took two wickets each as the visiting team registered a comfortable win.

In the second match of the day at the Wankhede Stadium, comeback pacer Sree Santh bagged a solitary wicket for Kerala as they beat Puducherry by six wickets with 10 balls to spare.