Suggested Dhoni to be promoted during 2011 WC final: Sachin Tendulkar 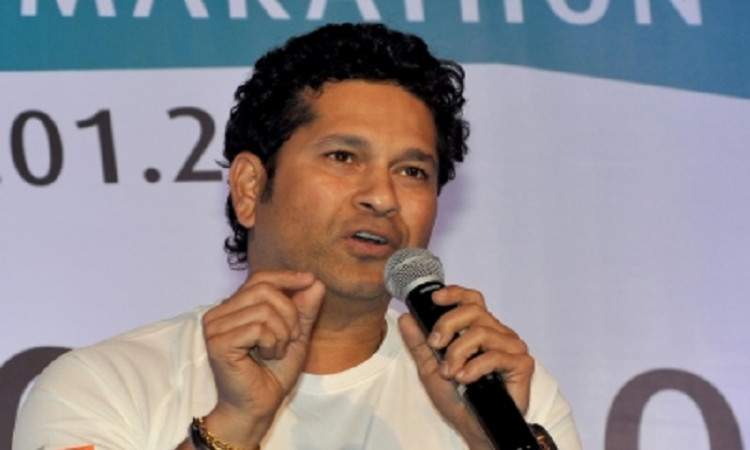 New Delhi, April 5: Sachin Tendulkar said that it was he who suggested to then Indian captain M.S. Dhoni that the latter should promote himself to number five instead of sending the in-form Yuvraj Singh so as to keep the left-right combination going.

Tendulkar felt that Sri Lanka were bowling two quality off-spinners and so keeping the batting combination alive made sense. "Gautam (Gambhir) was batting brilliantly and someone like Dhoni could've kept rotating the strike," Tendulkar told Times of India as he and Virender Sehwag narrated the sequence of events that led to Dhoni walking out to bat after Virat Kohli was dismissed.

"So I told Viru, 'tu overs ke beech mein sirf ye baat bahar jaake MS ko bol aur next over shuru hone se pehle waapis aaja. Main yahan se nahi hilne wala (Just go out into the balcony between the overs only to say this much to MS and come back fast before the next over begins. I'm not moving from here)."

Tendulkar had earlier asked Sehwag to sit with him in the dressing room and not go out to the balcony after the pair got out. "I came back to the dressing room after I got out and went and sat in my seat. During the quarter-final, against Australia, after our (Tendulkar & Sehwag's) partnership, I had returned to the dressing room and was lying down on the physio's table and Viru was next to me. We hadn't moved. Even this time (at Wankhede), coincidentally, Viru happened to be there and I asked him to sit next to me and not move," he said.

Sehwag said that just as Tendulkar was finishing what he was saying, Dhoni himself walked into the dressing room. "I asked MS to consider this strategy," said Tendulkar. "He then went to (coach) Gary (Kirsten), who was sitting outside. Then Gary came in and all four of us got talking about it. Gary too agreed it was the right thing to do, given the attack on hand. MS also agreed and promoted himself up the order," he said.

The move turned out to be one that played a big role in India winning the match. Dhoni got stuck in and was later joined by Yuvraj after Gambhir got out three runs short of a century. The pair put up an unbeaten 54-run stand with Dhoni slamming 91 off 79 balls. He ended the match with the now iconic six over long on.

Tendulkar and Sehwag have both had long illustrious careers and both see the 2011 World Cup win as the pinnacle. Tendulkar was into the 22nd year of his international career and this was possibly his last chance to win the World Cup.

"Gautam's knock was exemplary. It put the chase in perspective and set the platform. And the way MS finished it was brilliant. It was an imperious knock. That six was the icing on the cake," said Tendulkar.