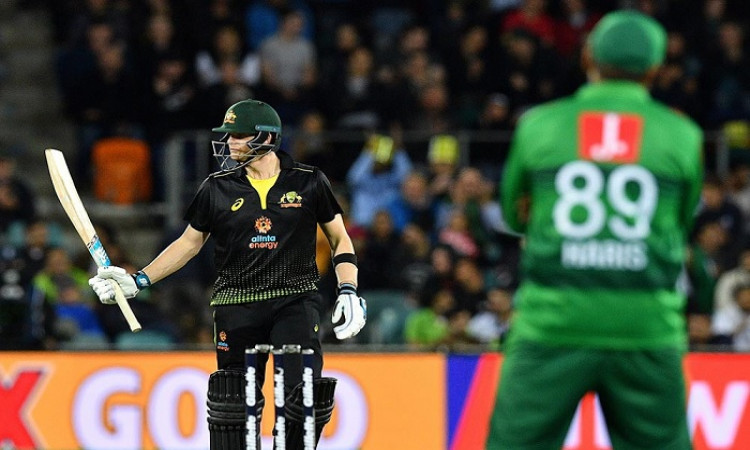 Canberra, Nov 5: An unbeaten 80 by Steven Smith handed hosts Australia a comfortable seven-wicket victory over Pakistan in the second match of the three-match T20I rubber at the Manuka Oval here on Tuesday. With this win, Australia have taken a 1-0 lead in the series with the first match being washed out on Sunday in Sydney.

Chasing a moderate 151-run target, Australia lost openers David Warner (20) and Aaron Finch (17) with just 48 runs on the board before Smith stepped in to put things back in control for the hosts.

Also Read: We believe in ourselves so there is no pressure: Yuzvendra Chahal

While Mohammad Amir accounted for the wicket of Warner, Mohammad Irfan packed back Finch in the sixth over.

However, with Smith in the middle, the Pakistan bowlers failed to make any further inroads in the Aussie batting line-up as the former captain stabilised the situation and swiftly propelled his side to the three-digit mark in 11.5 overs. Smith received able support from Ben McDermott (21 off 22) as the duo ensured that their side did not face any further hiccups.

Just when everything seemed settled for the hosts, Imad Wasim achieved a much needed breakthrough as he trapped McDermott before the wicket in the 13th over.

However, Smith, who was then joined by Ashton Turner (8), continued with his strokeplay and kept on rotating the strike with his new partner before they helped Australia cross the line with nine balls to spare.

Smith's unbeaten knock, which came off just 51 balls, was laced with 11 boundaries and a hit into the stands.

Earlier, opting to bat first, opener Babar Azam's (50) half-century followed by Iftikhar Ahmed's 62 propelled Pakistan to a fighting 150/6 in the allotted 20 overs. Apart from the duo, the other batsmen failed to score big as Ashton Agar picked up two wickets for 23 runs while Kane Richardson and Pat Cummins bagged one each.

Both the sides will now face-off in the third and final T20I in Perth on Friday.