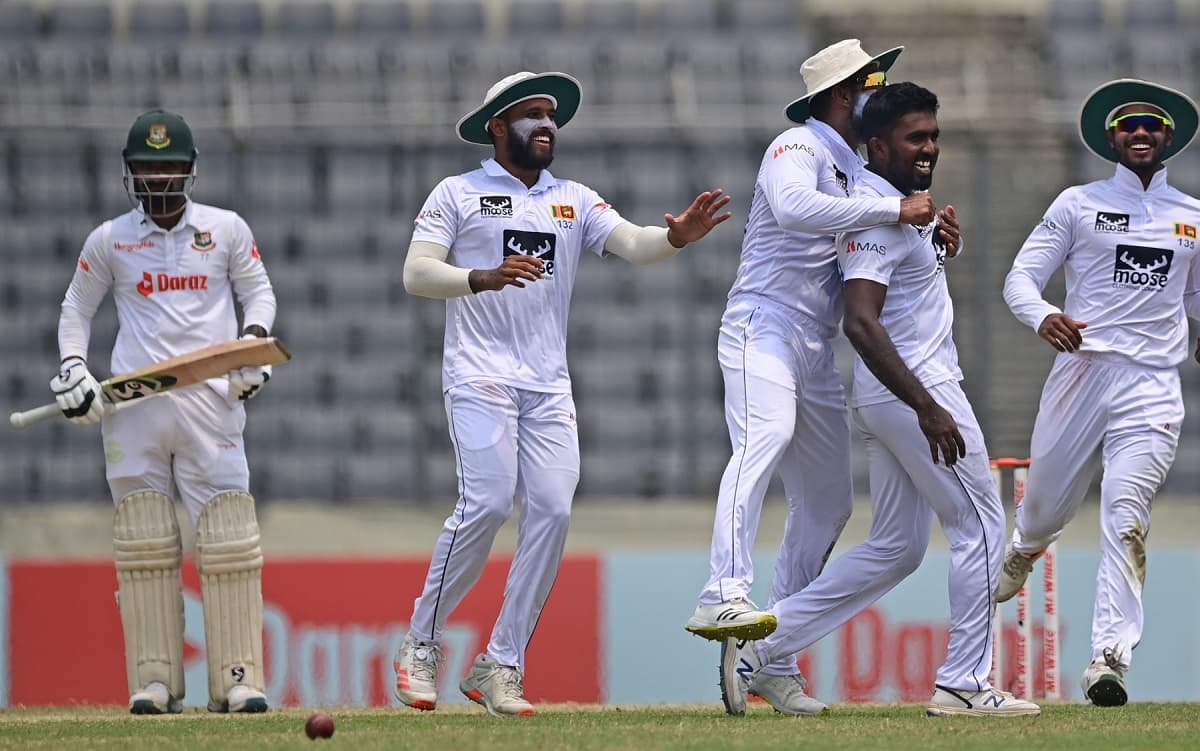 Asitha Fernando finished with a career-best 6-51 as Sri Lanka thrashed hosts Bangladesh by 10 wickets in the second Test on Friday to win the series 1-0.

The visitors bowled out Bangladesh for 169 runs in their second innings with the 24-year-old playing a starring role at Dhaka's Sher-e-Bangla National Cricket Stadium.


'I Bowled 2 Wides, Dhoni Came Up And Said Stop Looking At Me And Bowl'

"We knew we needed a couple of wickets to go our way," said Sri Lanka skipper Dimuth Karunaratne.

"The fast bowlers did the job for us, both in the first innings as well as the second."

Sri Lanka made 506 runs in the first innings after bowling out Bangladesh for 365.

Oshada Fernando sealed the devastating win with an unbeaten 21 in three overs.

Play had resumed on the fifth and final day with the hosts at a precarious 34-4 and Sri Lanka upped the pressure when Kasun Rajitha bowled Mushfiqur Rahim for 23 in the eighth over.

Shakib Al Hasan and Liton Das both hit fifties in a 110-run stand and held on through the first session with a mix of caution and aggression.

Shakib's counter-attack saw him hit Rajitha for three fours in one over, forcing Sri Lanka to widen their field set-up, while Liton played an anchor role after resuming on one overnight.

Liton was given out caught behind off Rajitha on nine as he attempted to flick a ball going down the leg, but survived on review.

It was the fourth caught behind decision overturned in the match, all given by West Indies umpire Joel Wilson.

A counter-punching Shakib brought his 27th Test fifty in the last ball before lunch with a boundary off Dhananjaya de Silva, before Asitha drove the hosts' collapse after lunch.

He took the scalps of both Liton and Shakib soon after the break, claiming four of the last five wickets after dispatching openers Mahmudul Hasan Joy and Tamim Iqbal the previous day.

Ramesh Mendis trapped Mosaddek Hossain for nine before Asitha wrapped up the Bangladesh innings with the wickets of Taijul Islam and Khaled Ahmed in successive deliveries.

"They put us under pressure with the new ball, we'll have to handle it better next time," he added.

Asitha conceded 144 runs for his first 10-wicket Test match haul, with 4-93 in the first innings.

He and Rajitha had Bangladesh reduced to a pitiful 24-5 at the start of the first day before Mushfiqur (175 not out) and Das (141) staged a recovery.

But Sri Lanka rode on man of the series Angelo Mathews (145 not out) and Dinesh Chandimal's 124 to take a commanding 141-run first-innings lead.

Bangladesh collapsed again at the start of their second innings, losing the first four wickets for 23 runs to leave Sri Lanka in full control.

The first Test in Chittagong ended in a draw.