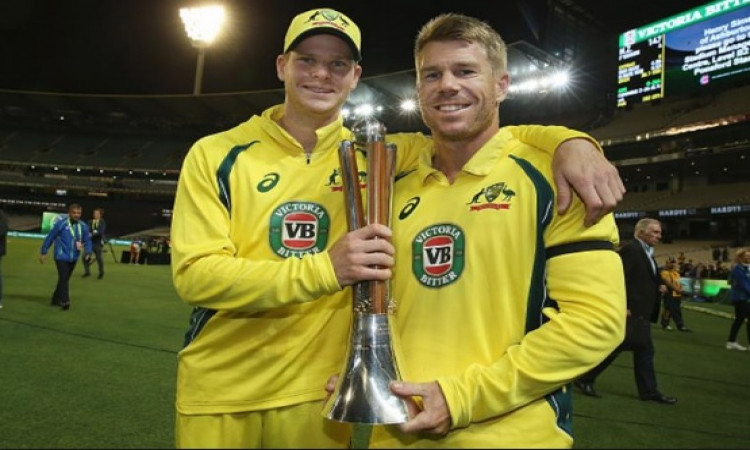 May 25 (CRICKETNMORE) Australia's David Warner and Steve Smith were subject to boos by the crowd during Saturday's pre-World Cup warm-up match against England at the The Rose Bowl in Southampton.

Warner, who opened the innings with captain Aaron Finch, made 43 runs off 55 balls before falling to Liam Plunkett. According to reports, boos and jeers rang out from the stands as he walked back and continued as Smith walked in to take his position at the crease.

Posts on social media from in and around the stadium showed fans walking at the edge of the ground in red cricket ball outfit with sandpaper on their hands. Cricket writer Chris Stocks tweeted that Smith was booed by large numbers in Southampton "as chants of ‘cheat, cheat, cheat, cheat' ring around the ground."

At the World Cup that starts on May 30, Smith and Warner will be making their comeback into the Australian squad after serving out the 12-month bans imposed in the aftermath of the 2018 Sandpaper Gate fiasco. The warm-up match against England thus acts as the start of what will be a gruelling tour of the country of the duo as the World Cup will be followed by the high-voltage Ashes.

Coach Justin Langer had earlier said that while Warner and Smith are ready for the barrage that could be coming their way from the England fans during the tour, they will need to be taken care of. "There's not too many I've met in my life who like being booed or heckled or disliked so… they're human beings. We're going to have to care for them, we're going to have to put an arm around them and make sure they're going okay," he said.

England all-rounder Moeen Ali, on the other hand, appealed to fans to not get personal with their chants against the duo. "I really hope they don't get too much stick. I want them to enjoy the series. If you have to, keep it funny, not personal," Ali said. "We all make mistakes. We are human beings and we have feelings. I know deep down they are probably really good people. I just hope they get treated decently. I just want the cricket to be spoken about."