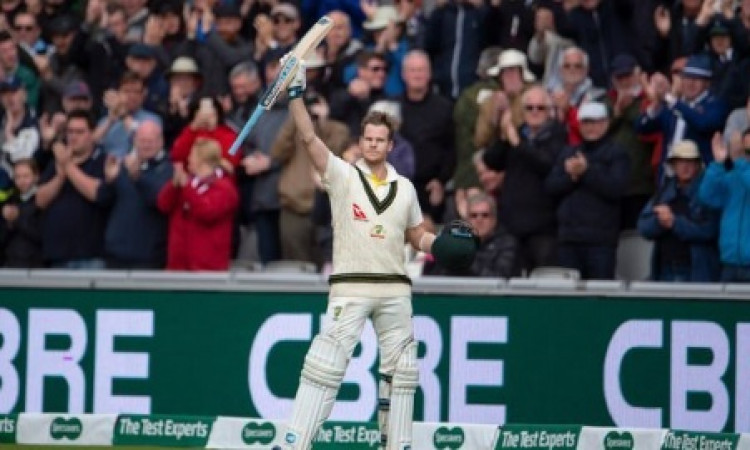 Manchester, Sep 10. Australian batter Steve Smith has extended lead with India skipper Virat Kohli at the top spot in ICC Test Player Rankings for batsmen following his monumental effort in the Manchester Test which helped his team to retain the Ashes.

Smith's knocks -- 211 and 82 runs -- in the two innings in the fourth Ashes Test which Australia won by 185 runs against England has lifted him to 937 rating points, only 10 less than his all-time best aggregate achieved in December 2017. He is now 34 points ahead of Kohli and virtually assured of remaining at the top at the end of the five-match series.

Meanwhile, Pat Cummins who picked 7/103 at the Old Trafford, has also helped him to consolidate his position at the top spot in the bowlers rankings.

Cummins has equalled his career-best aggregate of 914 points, which is the joint fifth best of all time and joint best for Australia along with Glenn McGrath, who reached his best in 2001.

The right-arm pacer is a good 63 rating points ahead of South Africa fast bowler Kagiso Rabada, with Jasprit Bumrah in third place. Josh Hazlewood is in the top 10 for the first time this year, progressing from 12th to eighth.

Meanwhile, Afghanistan's 224-run conquest over Bangladesh in Chattogram has resulted in major gains for their players.

Former captain Asghar Afghan's scores of 92 and 50 have taken him from 110th to 63rd position while Rahmat Shah's century in the first innings has helped him move from 93rd to 65th.

Captain Rashid Khan's Player of the Match effort of 11 for 104 has lifted him from 69th to 37th while all-rounder Mohammad Nabi has retired from Tests in 85th position after gaining 21 slots.

For Bangladesh, left-arm spinners Shakib-al-Hasan and Taijul Islam have inched up one slot each to 21st and 22nd, respectively. Off-spinner Nayeem Hasan has advanced 21 places to 66th position.