SL v WI 1st Test: Lankans In Driving Seat As They Spin A Web Around The Windies

The spin trio of Praveen Jayawickrama (2/25), Ramesh Mendis (3/23), and Lasith Embuldeniya (1/39) shared the six wickets as West Indies struggled to 113/6 in their first innings on Day Two of the first Test, trailing by 273 runs. 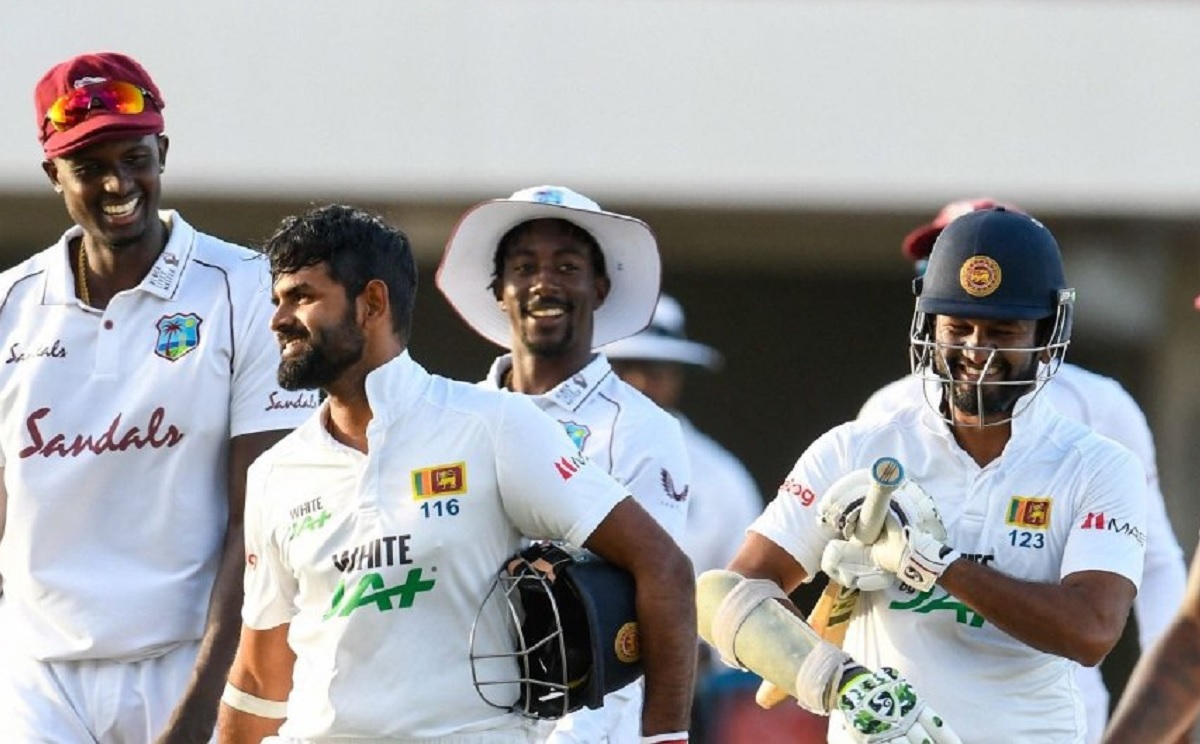 Kyle Mayers was batting on 22 with Jason Holder (1) at stumps on the second day. The visitors need 273 runs to overtake the hosts with only four wickets in their hands.

Sri Lanka started the day on 267/3, were all out for 368 in 133.5 overs as skipper Dimuth Karunaratne got out for 147. West Indies allowed them to add a few runs and when it was their turn to bat, their batsmen failed to put up a big score, landing them in the predicament they find themselves in now.

Earlier, as the hosts started their innings in the morning, West Indies needed early breakthroughs to stifle the flow of runs and restrict the hosts to a reasonable total. Shannon Gabriel did just that in the 95th over, with Dhananjaya de Silva getting out on a freak dismissal. He smashed the stumps with his bat in an attempt to stop the ball from bouncing onto the sticks. This brought to an end to his knock of 61 ending the vital partnership with skipper Karunaratne.

The wicket of Karunaratne soon followed suit as he was stumped off the bowling of Roston Chase. Nonetheless, his exceptional knock of 147 firmly put the hosts in a strong position in the contest.

Ramesh Mendis who joined Dinesh Chandimal at the crease, too couldn't last long as an excellent flighted delivery from Warrican caught his thumb into the hands of the keeper. Sri Lanka would end the session on 341/6, hoping to add some crucial runs after lunch.

The visitors had to be patient in an effort to get some wickets in the bank after the break, as Suranga Lakmal and Chandimal batted well to mount a stern defence. But Warrican would prove to be the man to deliver the wicket again, trapping Lakmal in front of the stumps for 11. Spin would do the damage once again as Chandimal's handy knock of 45 was brought to an end by Roston Chase.

Chameera came and went for 3, attempting a big one against Warrican who celebrated another scalp after struggling with his discipline in the morning session. Lasith Embuldeniya would then frustrate the visitors with a handy cameo of 17 before mistiming one straight into the hands of Jermaine Blackwood as Chase would complete his five-for. The Windies would then head to tea unscathed at 12/0.

Blackwood and Brathwaite would continue in the same vein at the start of the final session, playing each and every delivery on its merit. But spin would do damage for the hosts as tight spells from Embuldeniya and Jayawickrama finally reaped rewards.

Embuldeniya struck first, trapping Blackwood in front of the stumps. Blackwood appealed the call but to no success as replays showed that the ball would be crashing into the middle and leg, bringing an end to his knock of 20.

Bonner then struggled in his brief stay at the crease, finally perishing against Jayawickrama. The delivery from the spinner turned sharply off the wicket, catching Bonner's edge and Dhananjaya de Silva did not make any mistakes in the slip to send the batter back to the pavilion for 1.

Brathwaite and Hope would then steady the ship for the visitors for the next hour or so and it seemed that they would head into stumps losing only two wickets. But the off-spin of Ramesh Mendis brought about a massive breakthrough for Sri Lanka, as his delivery on leg stump got him the wicket of the Windies skipper. Trying to play it fine, Brathwaite ended up guiding the ball straight into the hands of Nissanka at leg-slip, who took a sharp grab.

Mendis would strike again in his very next over and in consecutive deliveries to be on a hat-trick after getting Shai Hope out for 10. Oshada Fernando took a fantastic catch to bring about the dismissal as the Lankans were well and truly on top as the end of the day edged closer.

Two more wickets would then fall before the close of play, with Warrican being snapped up by Jayawickrama for 1 and Mendis picking up another one with the crucial strike of Chase, who would fall for 2.